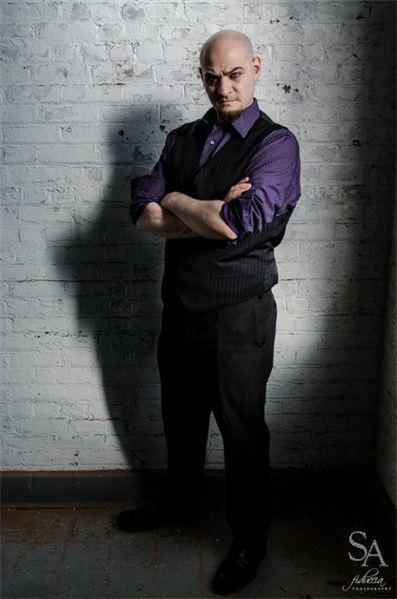 Jaysin Katsikis made his ground breaking debut at age 17 on Broadway at Caroline's Comedy Club and Comedy Nation. Charlie Chaplin gave Jaysin his first gig at Caroline's ~ or rather, the manager of the club dressed as the famous tramp. Jaysin only 17, asked the huge crowd that had gathered to step inside for drinks as a sign of gratitude for the show. With the flood of people stepping through the doors a not so silent Charlie Chaplin ( Lance Hallowell ) hired Jaysin to entertain guests nightly.

Jaysin was later one of the youngest featured artists at the NYC Fringe Festival in 1998 and enjoyed acting in small community dramas, performing in comedy clubs around Manhattan, a Pizza Hut commercial and eventually appearing on Rosie O' Donnell's show in the late 90's. Greatly influenced by various forms of art, science and the free-flowing artistry of jazz like Miles Davis and Ella Fitzgerald, Jaysin developed powerful original material by fusing side show skills and wonder into performance art. Blending poetry, music, comedy and light with an ever evolving, always surprising palette of magical delights and drama while perfecting his magical subtleties to create an eclectic spontaneous show, this inventive magician sought to delight audiences internationally.

Jaysin The Magician created a one of a kind "Entertainment Experience" by working his dynamic, quick witted and improvisational magic on thousands of delighted fans across the country. From 2002 to 2006, he traveled America performing everywhere from mom and pop clubs to major corporate shows. At 22 Jaysin moved to Las Vegas where he studied with world class cabaret performers and variety acts. When he wasn't learning how to handle fire or swallow razor blades, Jaysin studied with his friend and teacher, Guinness Book Of Records Holder and Master Magician Jeff McBride. Mr McBride is the "Magician of the Year" by the Magic Castle's Academy of Magical Arts in Hollywood and "considered to be the most influential magician of our age" by many.

With his newly honed skills in showmanship and theatrical entertainment Jaysin began performing in the Las Vegas resort casinos Caesar's Palace, MGM Grand, Excalibur, Westward Ho, Mandalay Bay and the House of Blues Foundation Room. Jaysin has also performed for the judges of NBC's "America's Got Talent" and has amazed crowds at various schools and performing arts centers through out the U.S.A.. He performs over 150 shows a year and is involved in designing and teaching enrichment programs that educate and motivate.

Jaysin has a bright bold personality that makes him the right character to entertain and promote for Fortune 500 companies, major corporations and celebrities! As an Emcee or performer Jaysin's unique abilities to capture and hold large crowds in wild applause, laughter and wonder is one of the reasons he is called upon time and again to appear for Trade shows, Corporate Meetings Events, Colleges and more. Jaysin has done work with the NJ Association for Gifted Children and donates his time monthly appearing at Sage Elder Care in Summit NJ. Many of his high profile clients include Macy's, Audi, Walt Disney, Rotary International, MAGIC clothing convention, FAO Schwartz, Dances of Vice, Ahern Rentals, CCA Insutries, Hilton Hotels, the American Cancer Society, the Leukemia & Lymphoma Society, Lippe Taylor, Nescafe' & Nestle'.

Today Jaysin engages audiences from Las Vegas to Coney Island with original powerful performances for lounges, cabarets and many of NYC's hottest clubs The Box, The Bowerey Poetry Club, Le Souk Harem & Beaumarchais. As well as talks on the subjects of magic and life, Jaysin collaborates and consults on various productions from Las Vegas to New York and abroad.

Jaysin has a bright bold personality that makes him the right character to entertain and promote for Fortune 500 companies, major corporations and celebrities! As an Emcee o