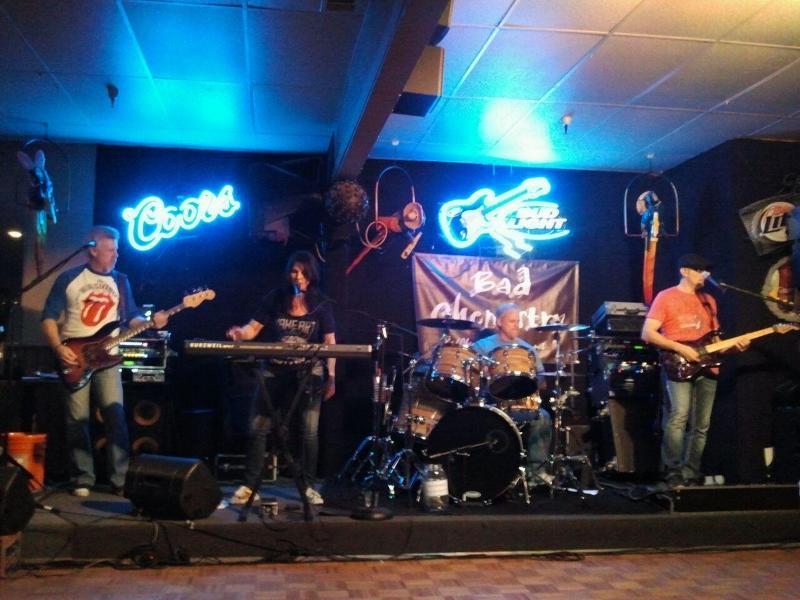 
BAD CHEMISTRY is a band with the energy and professionalism that will bring an excitement and fun-loving attitude to your venue or event. This band has a great time and it rubs off on the crowd! Whether it's a small private party, a rockin' club, or a concert venue, BC whips the crowd into frenzy with quality sound, cool song selections, and guaranteed dancing. With an ever expanding venue selection, you can catch some BC in a place that suits you!

Connie Listoe plays keyboards and is the vocal highlight of BC. Richard Weinfurtner is a well-versed lead guitarist who presents a higher level of musicianship through years of performing with So Cal's best players. Our driving beats and bass lines are provided by drummer Tom Smith and seasoned bass player Gary Smith.

The vocal talents of each member provide an amazing variety of styles and a BC signature to your favorite songs.

Bad Chemistry will make your event a success. Feel free to contact us for booking info anytime.

from: Echo and Buzz

Few will argue that a party can be any good without music. Yet what can be even worse is if the source of the music is lackluster or if the tunes just don’t match the mood. Thankfully, that is not a problem for Bad Chemistry, a band that knows the only true way to party is to go full throttle and be a part of the festivities, rather than only being a band on stage.

“Bad Chemistry has persevered through thick and thin to provide people a quick ‘escape’ from their nine-to-five routines and keep them dancing, partying, and coming back for more,” said bass player and vocalist Gary Smith in an electronic correspondence. Gary is joined by Larry Paschal on drums, Connie Smith on keyboard and vocals, and Rikki DeVille as lead guitar and vocals to make up the current Bad Chemistry group. In the past, Gary’s brother, Tom Smith, contributed his excellent drumming talents to the team, but had to step down. Yet his dedication to the band and their performances shines through from the long commute hours put in. With three different singers that can cover a broad spectrum of tones, the foursome do not limit themselves to any specific genre of music. Every member has been a lifelong musician who has leapt at the chance to shine every time it’s come. Connie’s vocal range and “rock and roll edge” allows her to cover a broad array of songs, including songs originally performed by male artists. Rikki himself was involved in recording productions and was pivotal to the release of BC’s demo video. Larry has consistently proven to have “phenomenal music ability,” said Gary, and brings with him not just excellent drumming but a great sense of humor. Gary himself started on guitar but became a bassist in 1981. From country to rock to the latest chart-toppers, no genre is closed to BC. Their versatility combined with their relaxed nature when working with clients has made the band high in demand, often hitting gig after gig.

In fact, Bad Chemistry’s amicable attitude is a point of pride for the band. Gary noted that one of the distinguishing points that keeps BC in the game is how cooperative they are with their venues. “It is a fickle business and most venue owners have enough to worry about without the entertainers coming in to make demands and ‘waves,’” he said. “We work with the management to make performances successful from all angles.”

Frequenting the various venues around Temecula and Murrieta, Bad Chemistry has become one of the more well known groups, with a sizable social presence online. Connie is the active hand behind Bad Chemistry’s excellent media publicity, managing the band’s website, Facebook page, and archives of footage. Yes, footage! Bad Chemistry keeps videos of their performances online on sights such as YouTube and gives the band a virtual portfolio for venues that wish to book them. But BC is never a group to only go half-way; in addition to past performances, the band has also taken to live streaming their shows whenever possible. “With Facebook Live, we can broadcast snippets of our gigs in real time,” said Gary, something that delights fans who can’t physically show up to every performance.

Bad Chemistry will continue its commitment to bringing the highest-quality entertainment to the people of Murrieta and Temecula. Even in this rainy season they persist, with numerous shows lined up. Their next show will be on the 28th of January at the Canyon Inn of Yorba Linda, 9:30pm. While you could watch them when they broadcast, there is nothing quite like being in the house itself as they get the party off right.