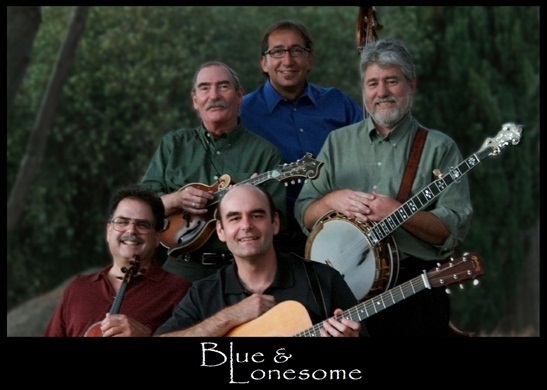 
Blue & Lonesome, – A traditional bluegrass band from Northern California playing in the style of the originators of the five members of this band are evenly matched in talent, influences and intent. Having been exposed to Bill Monroe, Flatt & Scruggs, the Stanley Bros and many other first generation players; Ed Neff, Mike Wilhoyte, Jeff King, Larry Cohea and Paul Shelasky, remind one why they were drawn to bluegrass music to begin with.

Bluegrass music, being a specific art form, demands certain structures, instruments and delivery to be called Bluegrass, these guys have all that and their individual creativity within that structure. A lifelong (so far) pursuit of these five players, to uphold and respect the originators, is apparent in the groove they attain, the energy they exhibit and the quality they deliver. This is Bluegrass music. A traditional Bluegrass band Blue & Lonesome has captured the traditional sound of bluegrass music, as it was originally played, incorporating the experience and talents of five of the top traditional players in the business today. The only full-time band with three honorary lifetime members of the California Bluegrass AssociationEd Neff is known to California bluegrass fans as the premier fiddler and mandolin stylist in the traditional vein. He has been a fixture in the Bay Area Bluegrass scene for over 40 years playing with such stalwarts as High Country, Done Gone, Roanoke, True Blue, Adobe Creek and the Vern Williams Band with whom he spent 15 years. Although Ed has long been acknowledged as one of the west's best fiddlers, Blue & Lonesome Bluegrass band takes advantage of his stellar mandolin work and benefits from his authoritative lead and tenor vocals. Ed has been awarded an honorary lifetime membership in the California Bluegrass Association Mike Wilhoyte was exposed to bluegrass music from an early age. Raised in Toledo Ohio he first went to see Bill Monroe with his father when he was twelve. Inspired to learn bluegrass guitar, Mike spent this teenage years integrating himself into the local bluegrass scene, and most notably forming the band Raison River with long time friend and renowned guitarist Jim Hurst. Moving to the bay area in 1989 to start his career as an electrical engineer Mike played bluegrass with a variety of groups eventually joining the newly formed band Roanoke and meeting Ed Neff. Mikes rock solid rhythm and lead playing are Blue and Lonesome's gain. Reminiscent of greats Doc Watson, Clarence White, and even Jerry Reed, he delights audiences wherever he plays. Larry Cohea has loved bluegrass since he first saw Flatt & Scruggs perform in 1959. He has been playing bluegrass, and the banjo, since 1963, and has never strayed from this tradition style of bluegrass. Larry is originally from Springfield, Tennessee, but spent sometime growing-up in Bakersfield, CA. Larry came to the Bay Area in 1973, and joined Butch Waller's band, High Country, as a bass player. Soon thereafter he replaced Bruce Nemerov on the banjo and the rest is a well documented history, as he is still a member of that band, and a veteran of many other fine bluegrass bands from Northern California. Larry is one of the best, most hard-driving banjo players on the West Coast. His forthright, cutting vocal style is traditional bluegrass through and through. Larry sings lead, tenor, and baritone with Blue & Lonesome and joins Ed and Paul with a lifetime achievement award and lifetime membership in the Shelasky is a native of Northern California and a long time resident of Novato California. Paul started on guitar at the age of fourteen, and began fiddle and mandolin at age eighteen. Although his parents were classically trained musicians, Paul taught himself to be fluent in bluegrass, jazz, Celtic and a smattering of other styles. Paul has earned two California State Fiddle Championships, has twice been named California State Flat-picking Guitar