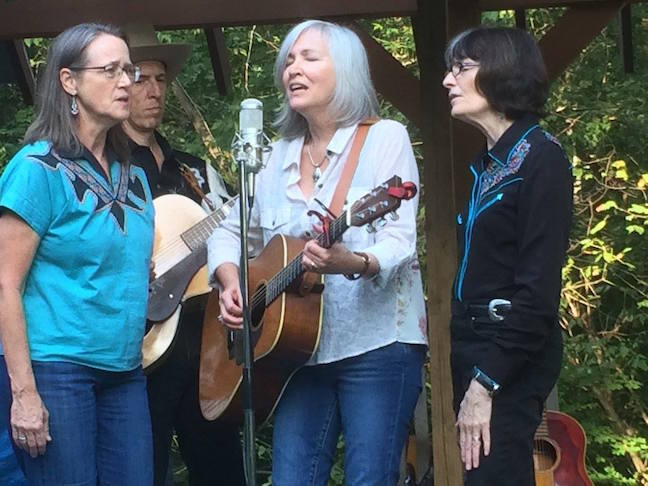 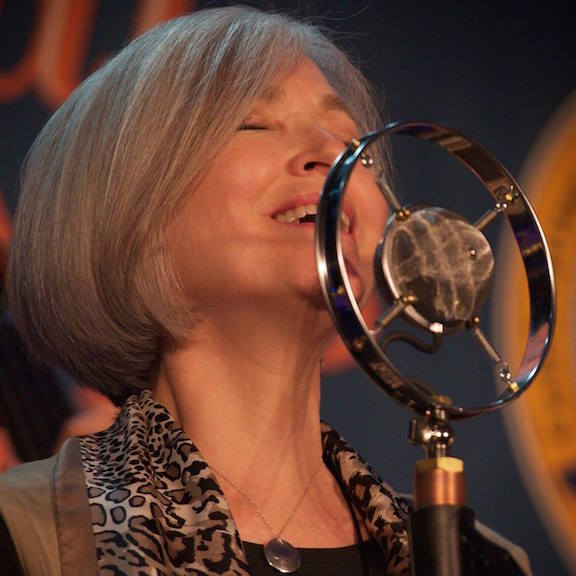 
"A little bit invitin', a little bit excitin', a little bit ignitin' . . .that's my trademark," proclaims an old song. And that's the Blue Moon Cowgirls, four Washington-area musicians with their own refreshing approach to country music. A shimmering trio of female voices backed by flexible acoustic instrumentation, the Blue Moon Cowgirls blend front-porch directness with neon-lit sophistication as they sing about home and highways, heaven and honkytonks, heartbreak and hope. Their repertoire stretches from the 1920s Appalachia to the 1990s California, with stops along the way at several decades' worth of prairie roadhouses and bayou dance halls. The sound of country music has always been on the move, but its heart has remained in the same place, and the Blue Moon Cowgirls can take you there.

"Karen Collins has one of those classic country voices. She is one of those artists who specialize in digging up rarely sung classics."
Blue Suede News - Summer '04

"Think Dolly Parton before she went Dollywood or the good clean fun of the Oh Brother Where Art Thou? soundtrack."
Takoma Voice - December 2004

"Her Americana texture, more corduroy than silk, creates a resonant roots vibe anyone can get down to. "
- January 2005

"Fans of both traditional country and Cajun music should check this out since Collins takes a no frills, authentic approach to her music"
Sing Out Magazine - February 2005

"Her Americana texture, more corduroy than silk, creates a resonant roots vibe anyone can get down to. "
- January 2005

Ann Porcella's musical taste gravitates toward the gospel music she learned at home from her preacher father and very large musical family. Her deep, powerhouse voice adapts well to many different traditional styles, though harmony singing is her first love. She has performed solo and with a variety of ensembles at folk venues around the country, including the Augusta concerts and Folk on Broadway. She and her husband Bill Schmidt perform at house concerts and coffeehouses as a duet, and with their old-time band the Vacutones for square dances and concerts.

Sally Love Connell the newest member of the Cowgirls, sings lead/harmony vocals and plays guitar. A WAMMIE award winner for best bluegrass vocalist, Sally is in demand as a lead and back-up vocalist, and has performed with various acoustic and bluegrass groups in the Washington DC area in such venues as The Ramshead Tavern, Kennedy Center, and The Barns at Wolf Trap. She and husband Dudley Connell have taught vocal and harmony classes at Augusta and Common Ground on the Hill and perform with their own group, Seneca Rocks!

Ira Gitlin's guitar playing gets its down-to-earth drive from his long involvement in bluegrass, and its sophisticated rhythms and harmonies from his interest in western swing and jazz. A WAMMIE award winning multi-instrumentalist and former National Bluegrass Banjo Champion, Ira is in demand as a sideman and music instructor. He can also be heard locally with The Backroads Band, The Oklahoma Twisters, and many other artists.