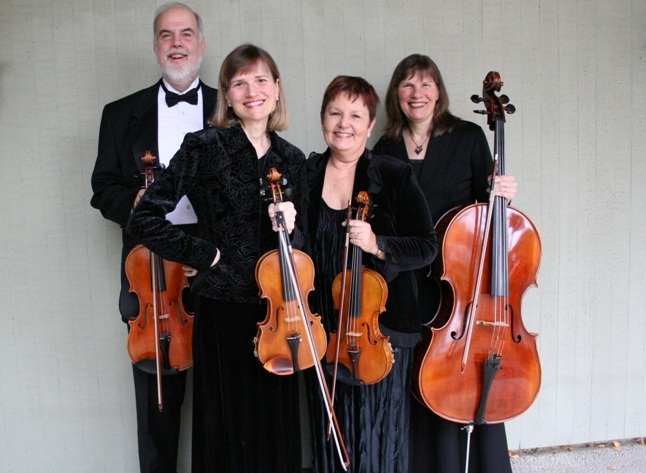 Providing the most beautiful musical accompaniment for your wedding is what the Cameo String Quartet is all about. Years later, we want you to remember how the music of Bach, Mozart, Handel and many others, helped to enhance what was perhaps the most important day in your life. Coming as we do from prolific professional backgrounds and years of experience, we are used to adapting to many settings (desert sand dunes excluded!) and will assist you in choosing perfect musical selections.

Please read on to the following close-ups. These will give you and even better idea of who we are and the experience we will bring to your special events.

Jennifer Sokol, a violin performance graduate from Indiana University, is a freelance violinist, performing with groups such as the Seattle Symphony and the Seattle Opera. She has appeared as a violin soloist with the Northwest Chamber Chorus, and Opus 7. In addition, she plays studio recording work, teaches private violin students, performs weekly for the liturgy at Christ the King Church, and is the author of her first book, Six Years of Grace: Caregiving Episodes With My Mother.

Patricia Strange is an active performer of contemporary violin literature and has concertized throughout the USA, Canada, Mexico and Europe. She received a Bachelor of Music degree from California State University Fullerton, and a Masters of Arts degree from the University of California San Diego. She has performed in the San Diego Symphony, Opera San Jose, San Jose Cleveland Ballet Orchestra, Mid Summer Mozart Orchestra, and was Principle Second Violin with the San Jose Symphony. Patricia and her husband, Allen Strange, have published a book entitled The Contemporary Violin: Extended Performance Techniques, available from Scarecrow Press. Currently she resides on Bainbridge Island, remaining active as a performer, teacher, and director of the Island Soundscape Chamber Players.

Daniel Wing received a Masters degree in viola performance from Indiana University. Over the next 15 years, he performed in orchestras and chamber ensembles in Germany, throughout Europe, and in the United States, before joining the Shoreline School District in 1988. Since then, his Shorewood High School orchestras have received many awards and recognition throughout the Northwest, and have performed in New York City?s Carnegie Hall. Dan remains an active freelancer and is on the conducting staff of the Cascade Youth Symphony.

Angela Sokol Russell studied with Seattle Symphony Principal Cellist Raymond Davis and continued on at Indiana University where she received a performance degree as a student of world-renowned master Janos Starker. She was a member of the Indianapolis Symphony and has performed with the Northwest Chamber Orchestra. Currently, she is a chamber music and cello specialist for the Seattle Youth Symphony orchestras, and freelances with several chamber ensembles in the greater Seattle area.