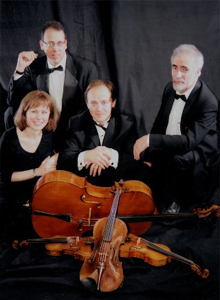 For over a decade the musicians of the Campanella Ensemble have been praised for the intensity and energy of their performances.

Whether it is a recital at Carnegie Hall or cocktail hour in your house our musicians will approach it with equal mastery and enthusiasm.

The members of the Campanella Ensemble hold degrees from the most prestigious conservatories including Juilliard, Manhattan School of Music and Moscow Conservatory. Our experiences as soloists, chamber and orchestra musicians insure flawless performances at every event.

The musicians of the Campanella Ensemble have been featured on Channel 12 News, in various commercial and classical recordings.

They played in the most prestigious halls throughout the United States and Europe including Carnegie Hall, Merkin Hall, Alice Tully Hall, Great Hall of Moscow Conservatory, Steinway Hall to name a few.