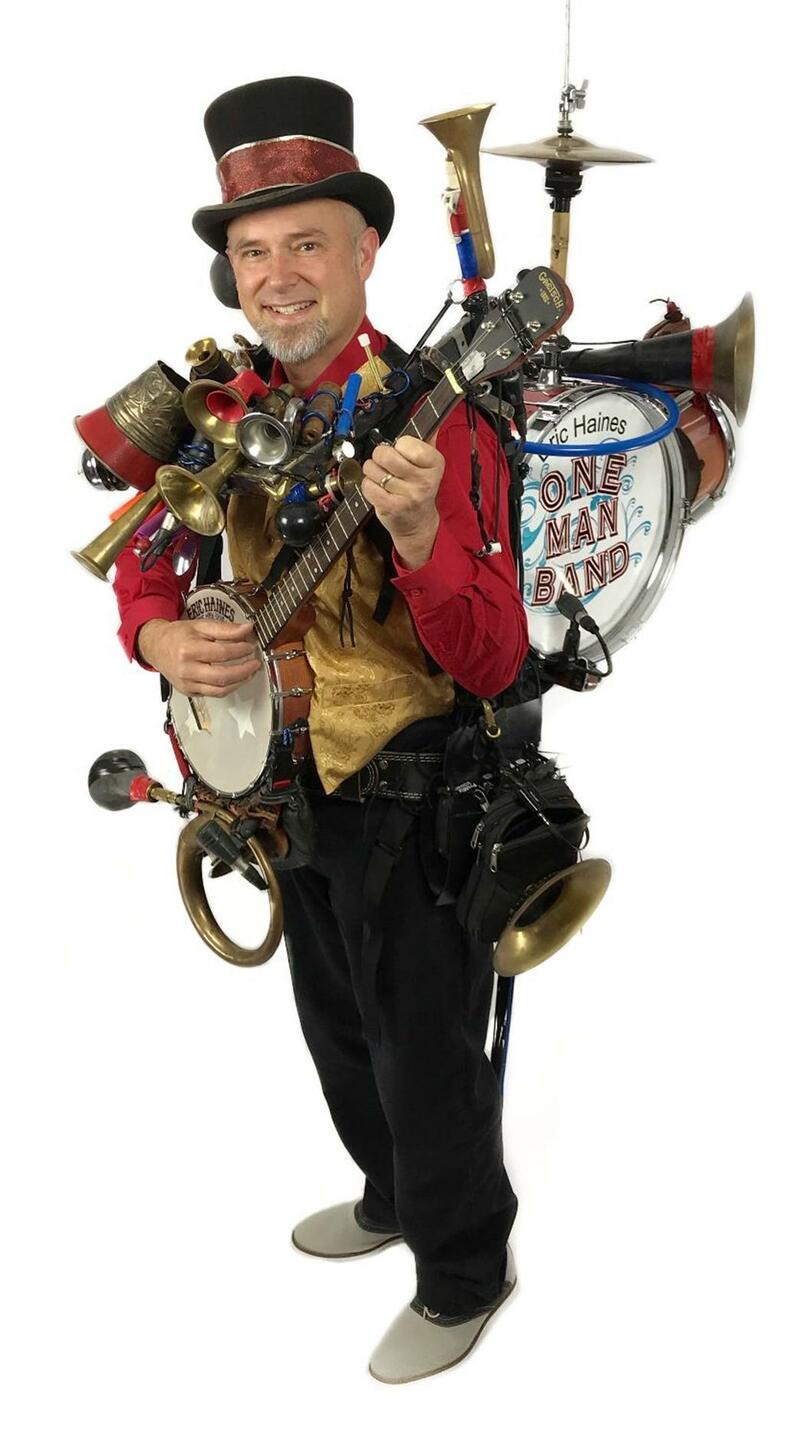 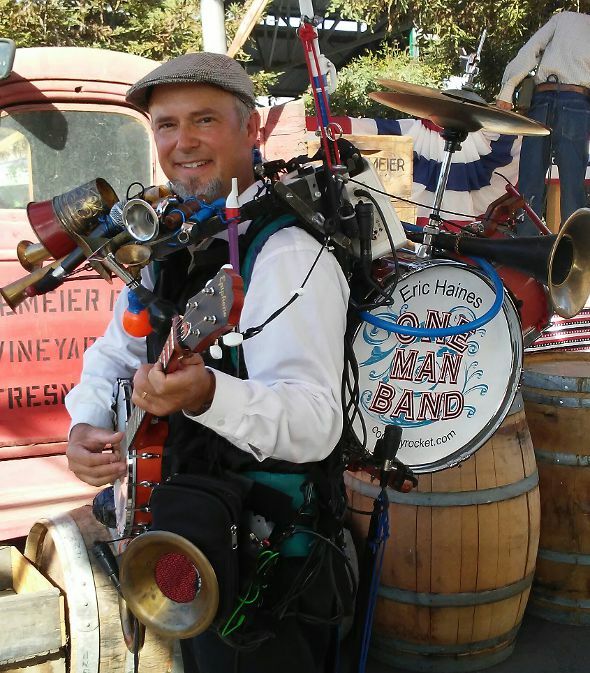 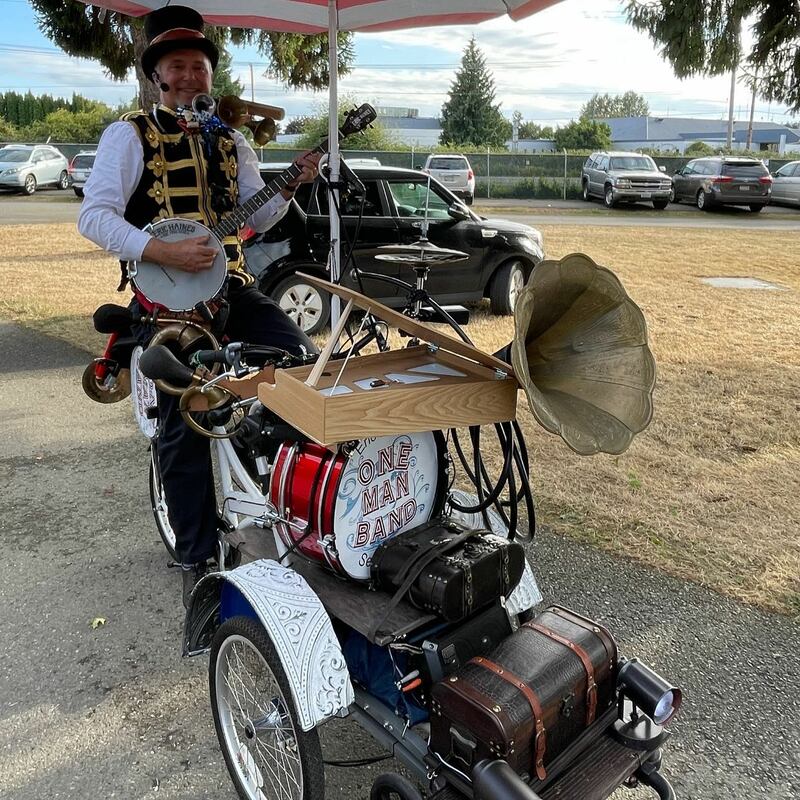 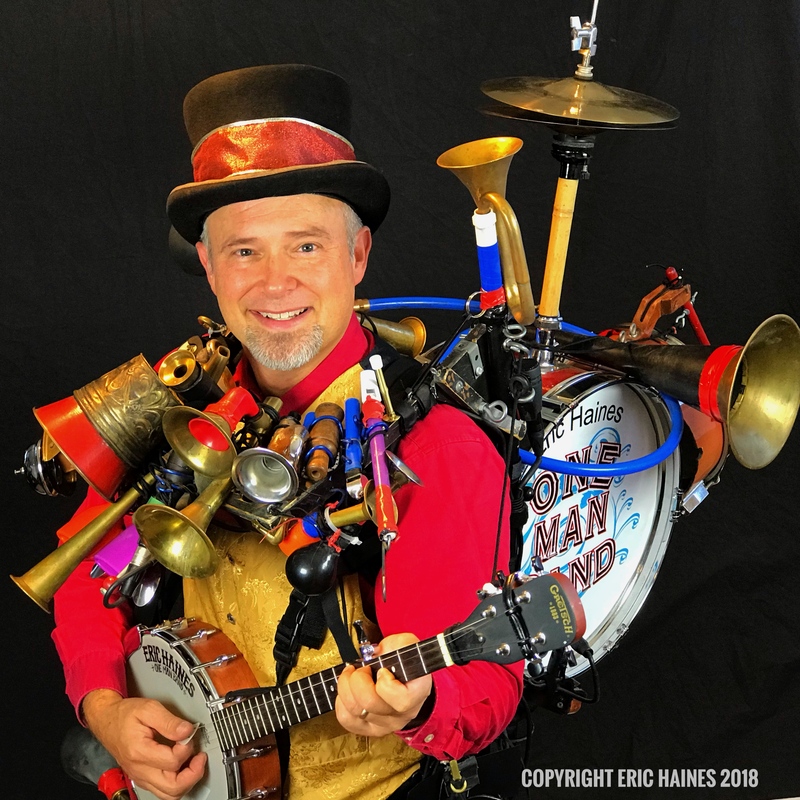 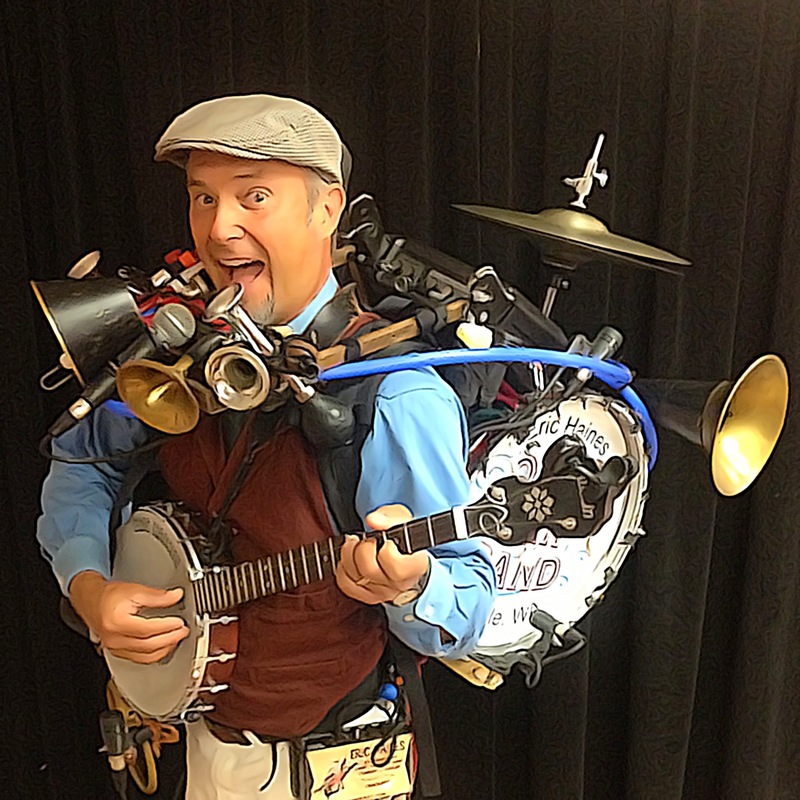 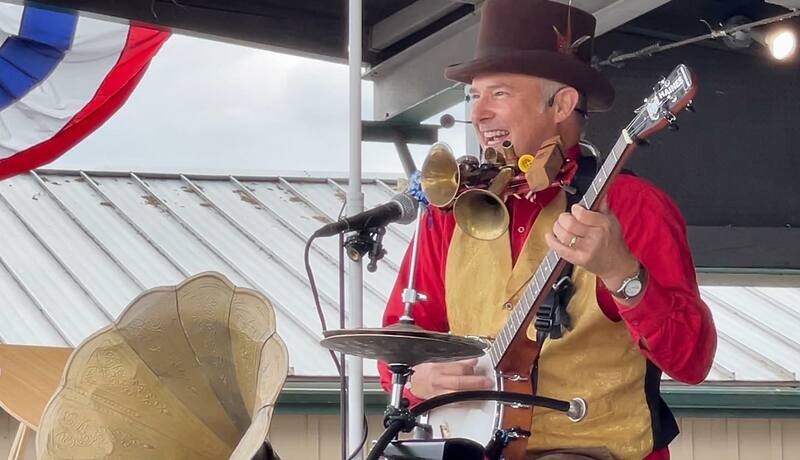 
Eric Haines is a classic one man band, with a bass drum on his back, a banjo over his shoulder, and plenty of bells and whistles everywhere else!

Kids and adults have the opportunity to play along on maracas, spoons and a special washboard equipped with a cowbell. The song list is a mixture of original tunes and parodies that Haines has composed himself for this instrument, and hits of the 1920’s and before.
The style is reminiscent of Dixieland Jazz.


Eric plays what can best be described as a traditional one man band rig, which most people associate with the Dick Van Dyke character Bert, in the movie Mary Poppins.

Guitar-slinging comedian Eric Haines brings pure entertainment to the world of comedy, with an act that is part rock concert, part comedy show and part twisted, bizarre circus.  He has appeared in Time Magazine and on ABC’s The Gong Show, his comedy songs have been featured on the Dr. Demento Radio program, and he was the winner of the Northwest Comedy Competition. Whether it’s stand-up comedy, unforgettable characters, original music, a six foot unicycle routine or amazing variety acts, Eric Haines puts on a spectacular show that truly has something for everyone.

Eric Haines grew up in Montana, where he was considered aristocracy because he owned an air compressor. His career as a performer began when a neighbor paid him $10 to perform at a birthday party. It was like teaching an Afghan farmer to grow poppies. Thinking that the easy money from performing meant he could avoid a real job, he quickly developed his own comedy-based variety show for corporate events. When Haines began working full time as a professional comedian in 1995, he had already been working as a corporate entertainer for over ten years, a remarkable testament to how hard someone will work to avoid work. He has over twenty-five years total experience working as an all-around entertainer, both as a comedian and in the professional fields of theater, children’s theater, school assembly programs, fairs and festival entertainment, school workshops and corporate entertainment.

Eric toured briefly in a circus just to make his family lose all hope, studied music and voice in Vienna, Austria, and hit the road for five years as an actor with three different theater companies, during which time he married his wife, Kim. She encouraged him to return to the University of Montana to finish his Bachelor of Fine Arts degree in performing arts, with an emphasis on dance choreography and performance. where he graduated with honors and fooled her into believing that he had become responsible and mature. After finishing his degree he spent eight years as half of a headlining comedy team called the Rock and Roll Comedy Circus of Death. After the team broke up in 2003, Haines struck out on his own and won the first two comedy competitions he entered, including the 2004 Northwest Comedy Competition. Highlights of his comedy career include an appearance on ABC’s The Gong Show in 2017, and article about his one man band in Time Magazine online, having his comedy songs played on the Dr. Demento show and the Mad Music Archive, and opening for Weird Al Yankovic, Neal McCoy and Louie Anderson.

Haines also spent three years personally building his family’s dream home. In an ironic twist, upon completing the 4,000 sq ft log house surrounded by a pine forest, medical tests revealed that he that he is severely allergic to pine. He now lives in a plastic bubble near Seattle with his wife and twin children. In 2010 he put together his one-man-band contraption, which has become his best known vocation.