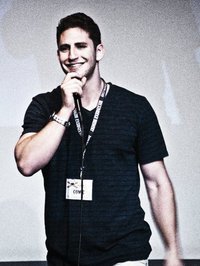 
I am a Stand Up comic and Improviser with a physical and high energy style of comedy. I got my start in Denver, Colorado and have experience performing in front of all crowds. I have performed for everything from Church Groups, to High School students, to Comedy Club audiences. I can accommodate for anything from PG rated material to X rated material. I have hosting experience and can include prop driven routines if the need should arise. Because my background is in comedic writing, I can cater my set specifically to a company or group as well.

I am currently studying at Second City and Improv Olympic as well as performing Stand Up all over town. Recently I was a semi-finalist in Denver's ComedyWorks "New Faces Competition" . I was also a featured comedian in the LaughTrack Comedy Festival. I have also appeared in the Denver Improv Comedy Club's "Future Legends of Comedy Showcase" on several occasions.