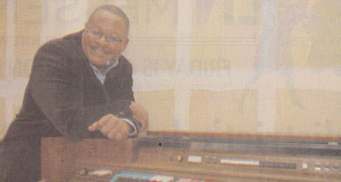 Also Known as Eugene with The Talking Sax, Eugene Anson Peebles was raised by two hard working parents in Kinloch, Missouri, a suburb of St. Louis, Missouri. Eugene felt the calling of being a musician at an early age it runs in the family. Numerous cousins are musicians' Eugene's father had a desire to play the organ, but was not given the opportunity.

Like all children, Eugene was outgoing and playful. There was a large hill behind his house, where he loved to play and ride his bike. His parents had warned him to avoid the hill, but Eugene like most kids couldn't resist the temptation. On his tenth birthday, while riding his bike on the hill, Eugene had an Accident. that left him in a coma for ten days. During this time, doctors weren't sure he would live. They even told his parents that even if he survived, there was a strong possibility that he would live in a vegetative state for the rest of his life. Despite the difficult situation, Eugene's family embraced their faith and believed in the power of God to heal him. As extra motivation, Eugene's father promised to purchase an organ when he came home. Sure enough, Eugene was healed and his father fulfilled his promise.

Eugene went on to study, piano, organ and saxophone. He developed a special love and talent for the saxophone, hence the Talking Sax was born. Eugene studied classical, jazz, Dixieland music and played in the concert and marching bands, where he was a standout member. Like many before him, Eugene honed his skills as a saxophonist and organist in a Baptist church in Kinloch, which at that time had one of the most sought after choirs and musician roster in all of St. Louis. In 1982, Eugene accepted a college scholarship and ultimately earned a Bachelor degree in Business from Central Methodist College while performing with college Jazz and concert bands. After college, Eugene held several positions in the St. Louis business community. As always, the Talking Sax performed at church, for local programs, and events. He even served as the minister of music for his home church: Devotional Missionary Baptist Church in Kinloch, Missouri.

A well rounded and highly experienced musician, some of the Talking Sax has performance include: opening for gospel artists such as John P Kee, The Williams Brothers, Angela Spivey, and the Mississippi Mass Choir. He also performed at the St. Louis Cardinals and St. Louis Blues Hockey Teams. He was also featured on Black Entertainment Television Bobby Jones Concert, filmed in St. Louis. Eugene is a member of the Gospel Announcers Gild and Musicians Association. A few years ago, Eugene, wife and two children relocated to Northern California where the persona of the Talking Sax continues to develop. He has played the National Anthem for numerous NBA and WNBA games.