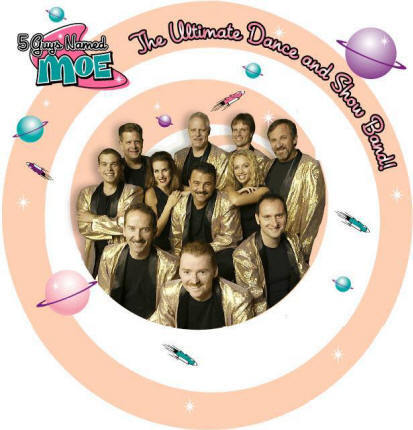 5 Guys Named Moe is a fabulous 11-piece horn-driven show band that's sure to be a hit at your next party or event! With the ability to tailor our show for your event, we offer a number of "theme shows" that are sure to please. First you have the option of a full variety show, which is a little bit of everything from the 40's to the 80's. Other options include a full set of easy listening jazz standards and swing music for a dinner set. If it's 50's Doo Wop and 60's rock 'n roll or Motown you want, 5 Guys Named Moe can do it. And, for a full-blown "Dance-'Til-You-Drop" party, we can do an entire show of 70's & 80's Hits and Disco. See our song list for our repertoire of hits in each theme show. Whatever you need for your event, we've got you covered!

Over the last 17 years, we've developed a group that is as much fun to watch as it is to listen and dance to. 5 Guys Named Moe is patterned after the larger, visually creative bands of the 1960's which used a horn section and back-up vocalists. The resulting full sound—combined with a variety of dynamic lead vocalists and their unique visual energy—sets 5 Guys Named Moe apart from other dance bands and can best be described as the "Ultimate Dance and Show Band" which includes: 11 entertainers on stage, including a four-piece horn section, groovin' rhythm section, back-up vocalists and as many as 5 lead singers throughout the event!

Colorful costumes and choreography creating visual impact and excitement! State-of-the-art sound reinforcement and technician as well as lighting system included in the performance fee. A professional and business-like attitude toward all aspects of the performance. A repertoire that is a compilation of Swing, Doo-Wop, Rock, Motown Soul, R & B and Disco from the 40's to the 80's that is sure to keep the dance floor packed!

Highlights of our variety show feature a trip back to the fabulous 40's and 50's with a medley of your Swing and Doo Wop favorites followed by a surfin' Beach Boys medley. Later, it's back to the 70's for a funky disco set. Also featured are some of your favorite Motown, Rock, and horn band hits from the 60's, 70's, and 80's. Irresistible to dancers young and old, 5 Guys Named Moe offers something for everyone and is your perfect entertainment package for events such as corporate parties, conventions, class reunions, fairs, festivals, concerts and wedding receptions.

Your important event deserves the best in live music entertainment. Let 5 Guys Named Moe make it your most memorable occasion ever! For "Moe" information just drop us an e-mail.

Read what others are saying about the 5 Guys Named Moe. Check out some recent references.