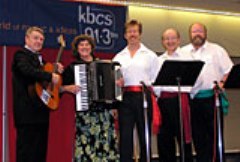 
Fortissimo!, often called Seattle's Three Tenors, has been performing in the Northwest for 15 years. They are a regular at the Festa Italiana held annually at the Seattle Center. You don't have to be an opera aficianado to appreciate the sound of these great voices. The program has great variety appropriate for all audiences. The Bonnie Birch Band plays instrumental favorites such as polkas, waltzes, marches, American swing tunes, Italian, Latin folk interspersed between Fortissimo! vocals. They will keep the audience tapping their feet and feeling like dancing. The group has performed for birthdays, anniversaries, The Bellevue Arts Festival, Shoreline Arts Festival 2005, Macy's Diversity Celebration, Folklife Festival, and is planning a performing trip to Italy in 2007. For smaller events, they may perform as a duo with accordian and one vocalist. From there, they may perform as a trio on up to a larger group consisting of accordian, guitar, bass, and three vocalists.