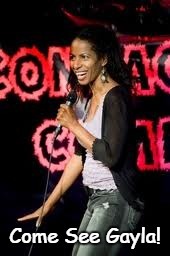 CLEAN HILARIOUS COMEDY, Funny, Physical Comedian. Gayla Johnson can't hide behind the mike, too many act-outs, characters, and re-enactments to experience. She LIVES on stage.  You'll be in for the RIDE of your life.  Telling jokes is one thing,  Re-living them onstage is another.  Gayla Johnson is an Accomplished Comedian and Actress with Notable Credits in Both areas.  Her Comedy CD, BLACK WIVES MATTER, produced and Avaiable through UPROAR ENTERTAINMENT,