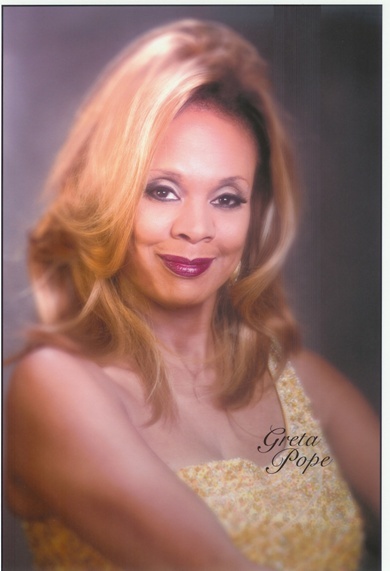 Greta Pope's performance spans all of these musical moods. and more!

Segueing smoothly from a lively Brazilian number into a beloved Broadway song. from a swing/jazz number into one with a Country flavor, this multi-talented entertainer demonstrates a striking versatility of voice and style.

Greta Pope is an International entertainer. She has delighted audiences throughout Europe, the Far East, South America and the Caribbean, as well as the United States and Canada. Ms. Pope has been touted as one of the great voices of our time, as she performs with ease all styles from Country to Opera, and from Rhythm and Blues to Broadway.

Ms. Pope holds a Master of Music Degree and has performed all styles of music. Greta is an entertainer as well as the leader of the Greta Pope Orchestra. Her performance credentials include sharing the stage with such well known performers as Wynonna Judd, Dick Van Dyke, Stanley Clarke, Carol Channing, Ramsey Louis, Rich Little, Penn & Teller and many others.