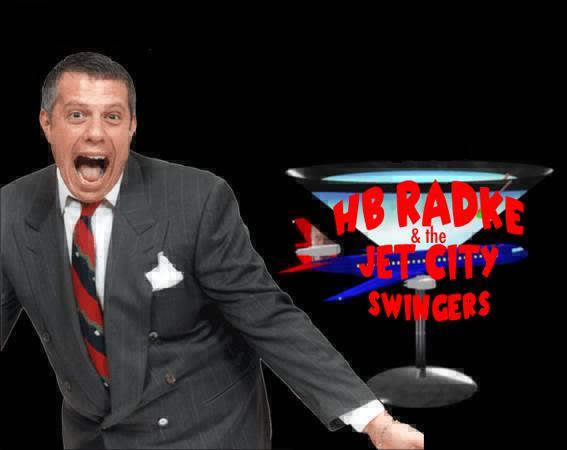 Entertaining, experienced and Radke's energetic personality and supreme abilities as a vocalist, bandleader, and entertainer never fail to please. With over 25 years of experience (HB started his first professional band at age 8) he has the unique ability to read a crowd and adapt the music selection on the fly. From Sinatra-flavored swing, latin, and big band jazz to disco, acid jazz, and “party” rock, HB and the boys will keep your guests smiling, dancing and singing along all night.
Although, HB has played over 1500 weddings and parties in his career, he approaches every event as if it were his first. Requests are always welcome.
HB can also furnish other musicians for ceremonies, cocktail hours, and background music.
Corporate EventsHB Radke & The Jet City Swingers, in addition to playing for dancers, can wow your guests with several different “dinner” shows. From 30 to 90 Minutes long each one of these themed shows will keep your audience spellbound until dessert. If your event includes an awards presentation or auction, HB's know how, and experience in conducting for live TV and Radio comes in very handy. Image your company's sales awards being enhanced by music cues, and traveling music really shortens the “dead air” between recipients. You will feel like you're at the Oscars.
HB Radke has performed for over twenty-five of his thirty something years. A whiz on the trumpet at the age of 6, HB played his first gig with Connie Stevens and Rich Little. With the helpful tutelage of HB's father, former Harry James lead trumpeter, Fred Radke, he started his own big band just a year and a half later. The HB Radke Orchestra became an instant hit in the Seattle area. Local TV performances ultimately led to command performances for Presidents' Ronald Reagan and George Bush, as well as national TV shows.
As HB grew older so did the band. He studied at the Grove School of Music in Los Angeles, and took a side trip into the world of Disco and House music production. It wasn't long before he went back to his true love. Swing. It was during his re-immersion into jazz that HB started singing.
He currently leads one of the most popular social bands in the Pacific Northwest and has performed with some of today's entertainment legends including: Mel Torme; Tony Bennett; The Harry James Orchestra; and many more. Performances also include shows with: Big Bad Voodoo Daddy; Pat Boone; Sha Na Na; Helen Reddy; the Royal Crown Review; the New Morty Show; and Dionne Warwick Some of HB's corporate and live performances include: Detlef Schrempf Celebrity Golf Classic Gala, Boeing, Microsoft, Adobe, AT&T, WRQ Photodisc, Fisher Broadcasting, Richard Karn Star Days, The Bite of Seattle, Bumbershoot, The Bite of Portland, Poncho, Children's Hospital, Starbucks, The Paragon, PacWest Racing (Bruce McCaw), Ackerley Communications, Gene Juarez, Onyx, The Cobalt Group, , University of Puget Sound, University of Washington, Portland Lutheran University; and many more.
HB and his turbocharged group have also played to capacity crowds at The Kingdome and Safeco Field for The Seattle Supersonics, The Seattle Mariners and The Seattle Seahawks.
Television, Radio and the Internet are also hip to HB. Merits include “Coffee and Pepto” as the nations #1 swing song on , several appearances on national syndicated shows Tom Leykis and Shaken Not Stirred, and appearances in the independent motion picture “Love My Guts”.
HB has composed music for local and national TV shows clients include: Fox Cable News, KCPQ 13 Seattle, Northwest Cable News Seattle, KOMO 4 Seattle,100.7 The BUZZ Seattle. He has also voiced commercials, children's, and corporate projects for various regional and national clients such as Bad Animals, Alaska Airlines, The Seattle Mariners, and Nordstrom.
The complete HB Radke & The Jet City Swingers song list is over 2500 songs and constantly growing. Here