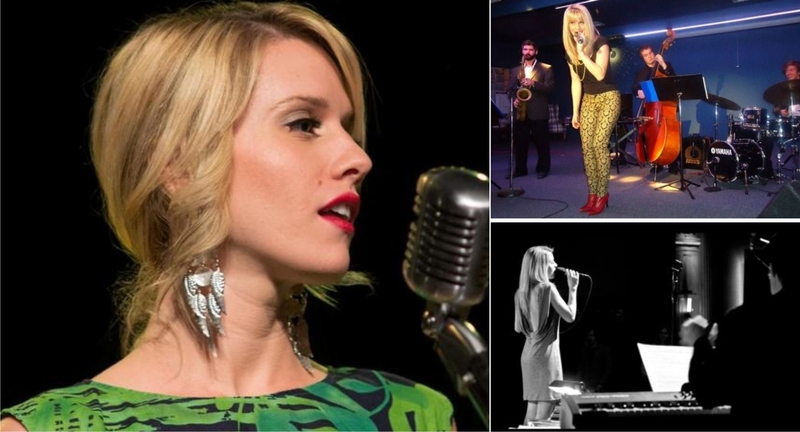 From trio to big band, jazz lovers have been following the career of San Francisco Bay Area Jazz singer Hale Baskin. Hale's style is infused with great tunes, hip changes and deep grooves. There's a reason why Hale Baskin is one of the most sought after vocalist in the SF Bay Area and beyond.

Hale Baskin — So young, so good, so “Classic”

Jazz lovers who have been following the career of San Francisco Bay Area singer Hale Baskin since she began winning local and national awards early in her career will certainly not be surprised by the mature, assured and, most importantly, eminently delightful Hale Baskin on display on Hale's second as a leader, her brand new recording “Classic.”

Those just learning about Hale are still in plenty of time to get in on experiencing the rapid-fire growth of this impressively talented and swinging young chanteuse. After all, even with two CDs as a leader to her credit, plus a basketful of performance awards and even a European tour to her credit, Hale Baskin is doing it in style.

Hale certainly wrapped up 2007 in fine style. Most prominently, perhaps, there's the recording and release of “Classic,” featuring outstanding Bay Area jazz stars like pianists Larry Dunlap and Dee Spencer, trombonist Wayne Wallace and trumpeter John Worley, Jr. Hale's mature musical presence is on full display on this CD. Listen to her dynamic, heartfelt reading of “God Bless the Child,” her joyfully swinging take on “Sitting in Limbo,” a song Hale first sang as a thirteen-year-old, and the sassy romp through “Summertime” that ends with a joyous vocal duet with singer Nate Pruitt, who just happens to be Hale's voice coach. Longtime fans will especially savor the leaps Hale has made in both the maturity and imaginative quality of her phrasing.

But Hale was getting national recognition even before releasing “Classic.” For example, she won the 2007 Down Beat Magazine Award for Best Student Vocalist. That's a strong call out from a pretty authoritative source, to put it mildly! And it's not the first time Down Beat called Hale's name. Her first prize in the 2002 Junior High School Division of Down Beat's Music Awards earned Hale a scholarship to Berklee College of Music's Summer Program, and she placed in the awards in 2006 for "Outstanding Performance."

Honors aside, this young dynamo also added to her impressive performing credentials over the past year. She toured Europe this summer, including dates in Italy, France, Germany, Switzerland (two performances at Montreux!) and Austria.

Hale has, in fact, been an active performer for years. She's already sung with both the Count Basie and Mike Vax big bands, jammed with singer Kim Nalley at the prestigious San Francisco hot spot, Jazz at Pearl's, and headlined at Pearl's.

Hale's first CD, “The Forecast Calls for Hale, was recorded in 2005 to happy reviews for one so young. The eminent producer and writer Dr. Herb Wong said of “Forecast,” "Hale Baskin has all the tools. She sings with admirable taste and control, rhythmic and harmonic sense, and clear insight into the jazz tradition. So dig!"

Soon after her first recording, Hale was invited to appear onstage with Arturo Sandoval at the famed Oakland jazz club, Yoshi's. That performance inspired Jim Harrington of the Oakland Tribune to write, “[I]t looks like we have a rising star in our midst. Remember Baskin's name. You'll be hearing it again soon.”

And now, thanks to “Classic,” we are hearing Hale Baskin's name, and her music, again. Get ready for more. You're going to like it.