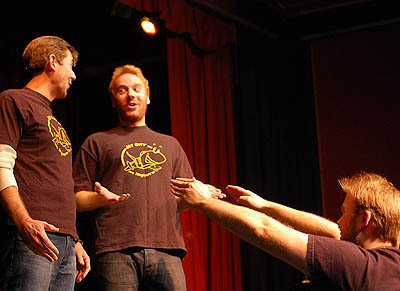 
Jet City Improv is an improvisational comedy company based out of Seattle. They perform scenes, musical numbers and comic routines based completely on suggestions from the audience. Jet City's regular shows consist of 90 minutes of fast-paced, original and hilarious theater that is sure to delight and entertain. Imagine, a whole show tailored expressly for each audience group. If you are worried about the show being "blue" or offensive, you may rest assured that Jet City prides itself by staying on a "Higher Plane of Comedy." The shows are meant for an all-ages crowd, and the players are so skilled that there's no need to fall back on profanity. You may rely on a clean show at Jet City Improv.

Jet City Improv is always available for private or corporate shows. We can tailor show length and subject matter to fit your group or event perfectly. Each member of Jet City Improv is a skilled professional with a rich background in comedy and improvisation. The combination of these talents will amaze and delight your audience.