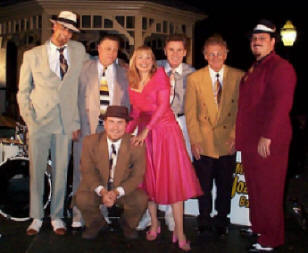 Based in Los angeles CA
swing, jump, jazz, and r&b.

The Jumpin' Joz Band is swingin'est band in Southern California. Their style is a wonderful combination of swing, jump, jazz, early R&B, reminiscent of Count Basie, Louie Prima, Benny Goodman, Sinatra, Ella Fitzgerald & Louie Jordan. Their music is great for listening as well as swing dancing. The band has a growing following of dancers from young to old. They not only have a great, swingin' sound but also and incredible show, and dress in a classy vintage style.The Jumpin' Joz Band has performed at all the most popular swing venues in California including, the Catalina Swing Dance Camp, The Derby, Disneyland Swing Night, Club Jitterbug, Avalon Ballroom, and Suzy Q's. They've played concerts from Palm Springs to Santa Barbara. They are in constant demand to play special events, company parties, weddings, fundraisers, movie openings and cast parties, community and political events, as well as private parties. Jumpin' Joz is the leader, drummer, singer, and arranger whose inspiration is the great Gene Krupa. He plays with an exciting down to earth swing beat. Because Joz is a swing dance performer and teacher, he plays the beat the dancers want to hear. Along with the great swing classics, Joz also sings and writes his own original swing music and harmonizes beautifully with Ginger Berglund. Ginger, who adds a wonderfully feminine touch to the band, is a talented, beautiful singer who style is reminiscent the great singers of the 1940's like Peggy Lee and Ella Fitzgerald. The usual configuration of the Jumpin' Joz Band is Female & Male vocal, Piano, Bass, Drums, Guitar, Sax, Trumpet, and Trombone. The musicians include the top swing and jazz musicians in Southern California. We also have a big band version with 4 saxes, and 3 brass, or a small combo for smaller events. The Jumpin' Joz Band have released two great CD's, Swingin' Radio, and Swing Dance Party. The title cut “Swing Dance Party” was #2 on the MP3 Swing genre for 8 months.I hope you will consider our exciting and swingin' music for your event soon.