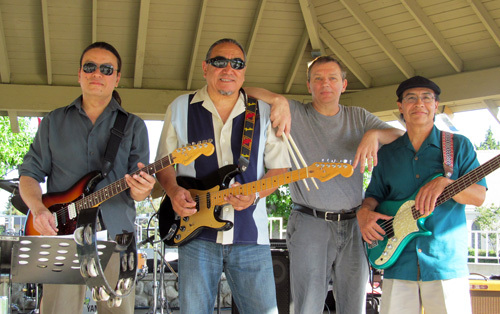 The L. A. Bluescasters is a six piece band that performs Blues standards as well as Classic Rock, Country and Jazz . The members of the band have a very diverse background, including Rock, Pop, Jazz, Country, Reggae, R&B, and Soul. and have performed on many' premiere stages in Los Angeles including The House of Blues (Sunset) B.B Kings Restaurant, The Palomino, Madame Wong's (east & west) The Troubadour, Pala Casino, just to name a few. The band has been performing as the L. A. Bluescasters for the past 21 years throughout the State of California and Nevada.

They have been described by reviewers alternately as “a band that knows what they were doing, one that could get me stomping my feet and slapping the table” who plays “some solid, old fashioned down and dirty blues.” Formed in the fall of 1992, the L.A. Bluescasters is a six-piece blues/rhythm and blues band from the Pasadena area. The band's music includes traditional and contemporary blues as well as rhythm and blues, swing, and original compositions. While the Bluescasters' music has included forays into other genres over the past 15 years, it never strays too far from its blues roots. The band's musical influences include Jimmy Reed, Howlin' Wolf, Peter Green, Albert King, B.B. King, T-Bone Walker, Big Joe Turner, the Allman Brothers Band, Stevie Ray Vaughan, and Eric Clapton. The L.A. Bluescasters have recorded two albums and have played numerous blues festivals, clubs and concert venues throughout the Southland, including House of Blues, the Glendale Blues Festival, B.B. King's, the Trubador, and the Baked Potato.