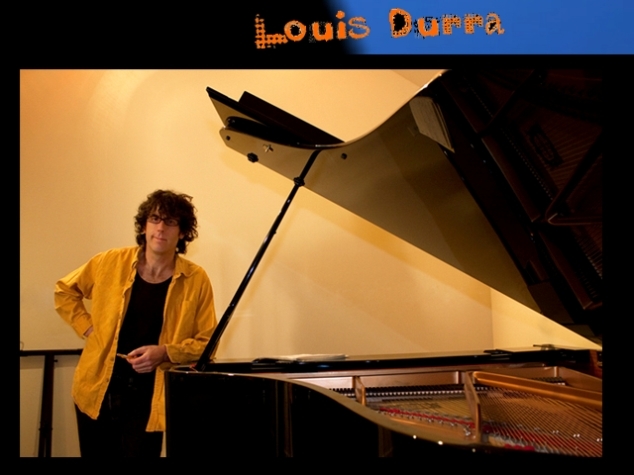 
This is a working group that has performed and recorded mostly as a trio with piano, bass and drums. We have good video presence on youtube As Louis Durra Trio and Arrogant Doormats (same personnel, different musical focus). We have performed three nights a week for a year in competitive Beverly Hills. We have also played the Dorothy Chandler Pavillion, the Kremlin, The John Ansen Ford Theater etc. We are able to perform in piano-less venues with keyboards.

"'How to Pack a Suitcase' is a humorous story, well told. Dave Frishberg or Mose Allison could easily add this tune to their repertoires." -- LA JAZZ SCENE

"Winkler then finds the lighter side of leaving on the retro soul-jazz flavored 'How to Pack a Suitcase'." -- ALLMUSIC.COM

". Durra also delighted in turning offbeat material into jazz such as "Ticket To Ride". He has his own fresh chord voicings, created unpredictable but logical solos, and uplifted such tunes as Earl Zindar's "How My Heart Sings", "Taking A Chance On Love" (in an arrangement originally for tapdancers) and Tomasz Stanko's "Six".
-- LA JAZZ SCENE

". a beautiful arrangement of my song!" -- HOLLY NEAR

“I've had the great pleasure of hearing Louis play on several of my film scores. He is one of the most musical, inventive, sensitive and giving musicians I've ever worked with. He never ceases to surprise, delight, and move me with his approach to the music. His fluid virtuosity transcends any specific style. I only wish I'd known him when I was a performing musician. He would be an inspiration and a blast at any gig! Five stars!” -- MIRIAM CUTLER, film composer

"One of the cleverest jaunts is "Sissies," a charming tribute to Truman Capote. " --ALLMUSIC.COM

“. the combo led by pianist Louis Durra is exemplary.”
-- IN MAGAZINE LA (Cradle Will Rock)

"Say, you've been around the block a few times!" --SUZANNE SOMERS

"Louis Durra's organ and Jerry Kalaf's vibes provide a smooth background for "You Don't Know What Love Is". Durra is equally facile on the piano and provides solid accompaniment for Krebs throughout the session." -- CD BABY (Susan Krebs' Jazz Gardener album)

"On 'Sissies', Winkler tackles the issue of homosexuality with a song that is funny, intelligent and defiant, which pretty much sums up its subject - Truman Capote, who was all that and more. Plus it swings hot!" -- LA JAZZ SCENE

". To describe one of my favorite piano players I've had the pleasure of playing with is to say, "Louis Durra, a true innovator". Louis is full of excitement. His original music is always fun and ch