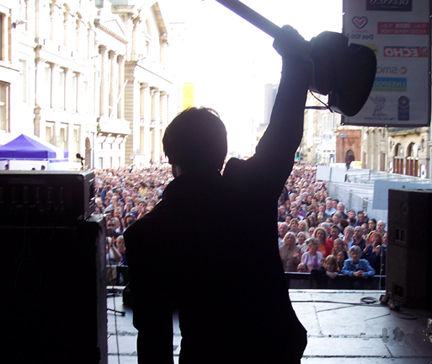 Me & My Monkey "The Beatles Tribute"

Based in Graford TX
tribute act

For 23 years, Me & My Monkey - The Beatles Tribute has been a favorite of North Texas, with credits such as Fort Worth Main Street Arts fest (17 years in a row) Mayfest, and MANY other major music festivals, Corporations such as NEC, Six Flags Over Texas, Barnett Shale Petroleum Group, NEC, Coca-Cola, American Airlines, The Texas Rangers, The Dallas Mavericks, The Dallas Stars, Southwest Sports Group, Choctaw Nation Casinos, Golden Nugget Casino & Resort (Reno)
and many, MANY others.. also featured at International Beatles Week in Liverpool England, with 7 shows in 5 days throughout Liverpool, including The Royal Court Theater, and the World Famous 'Cavern Club' - where the Beatles rose to fame in England. (M&MM played there - twice!)

There are many other beatles "cover" bands in north Texas and the Southwest..but only one full-on 'Tribute' to the Beatles..with authentic instruments and suits, in expert detail, performed by seasoned veteran performers.