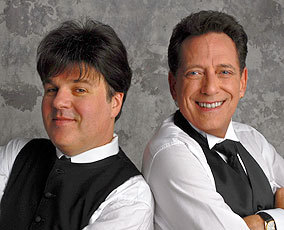 
Dueling Pianos (DP) has been around as long as there have been pianos. Beethoven wrote for four hands. There are accounts of piano duets and duels between Chopin and Liszt, Count Basie and Oscar Peterson, all the way up to Billy Joel and Elton John.

As a nightclub phenomenon, DP started at the still existing Pat O'Brian's in New Orleans in 1938. It began changing from a risqué jazz/blues act to a rock oriented show in the mid 80's and branched out to several clubs in Texas. The first DP club north of the Mason-Dixon line opened in 1989 at the legendary Baja Beach Club at North Pier in Chicago, and that's when Mick Archer comes into the picture.

A pro musician since the age of 13, Mick Archer trained at The American Conservatory in Chicago and The University of Illinois, where he earned his degree. The Chicago Tribune said "Mick Archer is . an impressive master of ceremonies. Whether it's putting hecklers in their place or singing an original, the Southside native is a natural showman." He was leading jazz trios, playing the blues clubs, and fronting his own original rock bands as a guitarist as well as a singing keyboardist when DP arrived in Chicago. Out of a field of over one hundred candidates, he was hired on the spot and began his dueling career, partnering with some of the finest rocking pianists in the country, many with whom he still works with today.

After more than a decade in the clubs, Mick Archer cleaned up the act and took it outside of the nightclub setting and presented DP to colleges, corporate, private and civic events and even seniors groups. As the many letters of reference on file indicate, this is an act for virtually any kind of event and audience: anything from tuxedoed classical instrumental mood music to swing & jazz, country, oldies, classic and contemporary rock. Plus, special theme events such as Xmas, patriotic, Blues, Beatles, Motown or individualized shows are available.

Of course, the act never gets too far away from the rocking good time audience participation show that has it's roots in the club scene.

Mick Archer has made many TV, radio, and recording appearances as featured act, sideman and jingle performer. He has shared a stage with such legends as The Drifters, The Platters, The Dells, The Tommy Dorsey Orchestra, Ted Nugent, Styx, Ray Charles, Jay Leno, Tito Puente and many of the finest of Chicago's blues and jazz greats. He has appeared nationwide and in eight countries, including three months as resident pianist at the Westin Tokyo.

Mick's primary partner in the Dueling Piano act is Ashton Wolf, an acomplished musician and entertainer himself. After graduating from The American Academy of Dramatic Arts in NYC, Ashton immediately began working in the entertainment industry and has performed extensively in national and regional venues, theatres, dinner theatres and nightclubs across the nation. He has worked with such notables as John Goodman, Chevy Chase, Dan Ackroyd, Meryl Streep, Bruce Willis, Ray Charles, Cuba Gooding, Sr., Gary Puckett and many others. He has also served as musical director/arranger for the Los Angeles Raider Band. Ashton has spent the last several years touring the country playing some of the top dueling piano clubs in the nation. He has been a Headline Entertainer in the Dueling Piano Show on the Royal Caribbean Cruise Line and was considered for the role of the Piano Man in Billy Joel and Twyla Tharp's "Movin' Out" on Broadway.