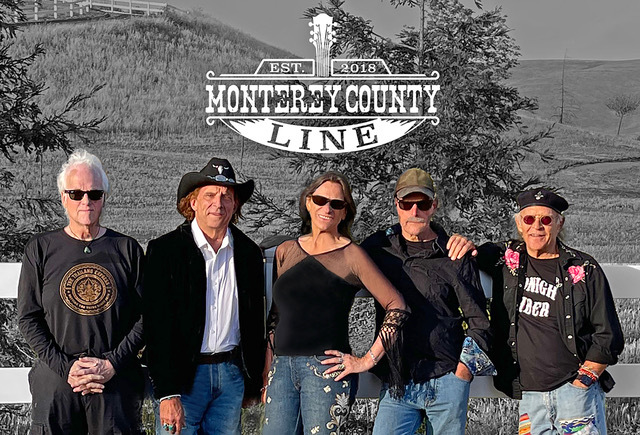 
This group of professionals will elevate your event to the next level and is the one-and-only, authentic Monterey County Line!

They are Monterey - Carmel's best and longest-running Country Rockers. With appearances on stage, live TV, and live radio, this pro-level band, including Nashville players, has more experience, musicianship, and on-stage professionalism than any other band currently in Central California.

Able to perform at a moment's notice, Monterey County Lineprovides everything you require for your event, from an acoustic solo or duo to the full-blown band experience, including their 10,000-watt sound system, stage lighting, and crew.

Thanks for checking us out! Hope to see you and rock with you soon!

​Chris Olsen is a consummate professional musician whose prolific career includes success in Nashville as a pro guitarist and music publisher.
As bandleader and manager for country stars Len Snow and Jessica Hawthorne, he was instrumental in the success of their Number 1 Billboard-chart-topping single, "Country's What I Choose." Radio airplay and personal appearances soon followed. Touring extensively to support the hit, his expert guitar skills delivered him through performances all over California, the USA, and beyond, including Alaska, Australia, New Zealand, South America, and even Antarctica!
Chris' pro attitude maintains the belief that he is there to serve every song. Over the years, he has performed music for acting on TV, theatre, studio, and radio. He has performed for or shared the stage with such greats as Jerry Garcia; country chart-toppers Little Big Town, Neil Young, Tommy Castro, Elvin Bishop, and Lydia Pense with Cold Blood. He also collaborated with Nashville producer Robert Metzger from Platinum Plus Records, Capitol Management, and many others. He was a regional judge in the nationwide talent search, the "Colgate Country Challenge" at the county fair in Madera, California.
Chris is a talented multi-instrumentalist and has mastered everything from 6- and 12-string acoustic and electric guitars to tenor, baritone, dobro, and lap steel guitars. His knowledge of acoustic and electric slide guitar styles such as dobro, bottleneck, and lap steel combines western swing, blues, country, rock, and Americana genres, including R & B, gospel, civil war-era songs, and bluegrass. He plays mandolin and has even done some keyboards, all of which have kept him busy for over 30+ years.
Chris brings a wealth of expertise to this latest project, including his creative songwriting skills and advanced production techniques, making Monterey County Line one of his most exciting and dynamic projects to date!

‘You have to know the rules before you can break the rules” is an old adage in music, and Janis Ceresi learned those rules while attending parochial grammar school and learning to sing in the choir. Being a team player was instilled early on, as she naturally gravitated more to harmony singing than taking the lead melody.
Her lifelong passion for music and art led her through a flourishing business career in graphic arts, design, and creative studio management in San Francisco and New York. This master graphic artist has designed album covers and advertising for Frank Zappa, Janet Jackson, and other big names in Los Angeles while continuing to learn the rules and hone her singing styles.
1990 found her back in her hometown of Stamford, Connecticut, performing as a singer and percussionist with troubadour Parker Coleman touring the east coast from New York to Charleston, including a long-running residency at the historic Jefferson Davis Inn in Lexington, Kentucky.
Throughout her thriving dual careers, Janis enjoyed countless hours harmonizing and recording with various San Francisco Bay Area artists, and in 1997, she moved to Northern California, where she avidly pursued her singing and artistic careers simultaneously. She happily made her home in the bohemian coastal West Marin town of Point Reyes Station for many years before moving to Monterey and Carmel Valley in 2018.
When the pandemic lockdown paralyzed the world in March 2020, Janis turned inward, relying on her musical and artistic talents to sustain and nourish her through the challenge. In Fall 2020, she teamed up with guitarist James Frederickson in the “Rodney James Project,” a popular rock duo, inspiring her to concentrate on music full time as she had always craved throughout her design career.
Now a journeyman musician, Janis can unleash her dynamic singing style and master-level musical craftsmanship by blending vocals and harmonies, elevating Monterey County Line to new heights.

Not just an all-around great keyboardist, but a first-class musician in all respects, Tim Bushman brings that rare quality to Monterey County Line of sincerity, quality craftsmanship, and professionalism. And to all of this, he adds his superb vocal abilities.
Growing up in the iconic music area of northeastern Ohio, Tim began playing piano at 5 years old, and he started his first band in the 7th grade. He was lucky that his piano teacher introduced him to the blues and the magic of improvisation at an early age. But before you know how to break the rules, first you have to know the rules, and Tim has decades of music theory to guide and fuel his improvisational side.
Tim’s musical travels have taken him through South Florida, Las Vegas, and southern California. Performing all over the United States in various situations, he has honed his knowledge of all the popular American music genres. Settling in the Monterey Bay region has steadily improved Tim’s skills and workload. He was also the founding keyboard player in the perennially popular central California band, ‘The El Dorados'.
Getting back to his classic blues roots Tim strives for a soulful and organic sound, although he could break out his ‘honk-tonk’ anytime!

“When you see us doing our thing…that’s what we were born to do.”

Providing bass lines for the varied styles of ‘Monterey County Line’ is not an easy task. But Paul Goss has been absorbing, performing, and playing bass for decades, including working for big names like James Cotton, Eleuthera with Stew Merrit, The Dean Markley Band, and time spent working for super-producer Tom Dowd at Criteria Studios in Miami, and eventually working his way up to the head of A & R at Artist Entertainment. From his family, while growing up in New York City, he “..saw how making music was the cause of some magical state of peaceful optimism”.
When he experienced Leonard Bernstein conducting Beethoven with the New York Philharmonic, every cell of his body resonated, and his vision became clear. Like the feeling he got the first time he heard a Rickenbacker 12-string guitar through a loud Fender amp.
Paul would carry that passion for the rest of his life. That passion also fueled his professional life in high-tech telecommunications, the then-nascent fiber-optic industry, and beyond. Paul was a senior executive manager for many of the early giants of the Tele-Comm industry and was GM at GE Capital/Access America and Centex Telemanagement.
He co-founded Sesame’s Business Consulting Group and was VP at New Edge Network (merging into today’s Earthlink) – all the time absorbing and playing bass in the rapidly expanding music scene in New York City. Starting his music career with Artist Entertainment Complex, an artist, management, and relations company, he rose to Talent Director before turning 30.
Paul and his wife advocate for our oceans through their longtime volunteering efforts for ‘Surfrider’. They are also deeply involved with various mentoring programs to help those afflicted with alcoholism and drug addiction in their community.

If you want a good band – you need a great drummer/ percussionist is always true in music. Being not just a great drummer, C.C. White is also an accomplished musician and arranger. The son of big band drummer from the forties, it’s clear that the beat is in his blood. Alongside his father, he was moved by the rhythmic stylings of Gene Krupa, Buddy Rich, and Ringo Starr. Once he started studying the performances of Neil Peart of Rush, he was transformed as a musician and a person.
Always the consummate professional, his energy on stage seems boundless, and his
sense of humor off-stage reflects his love of spreading joy.
Born and raised in Los Angeles, he jumped straight into the exploding music scene and quickly became very busy. Good drummers being in short supply, he was booked extensively through to the late ’80s. Learning well the ‘business’ side of the ‘music business,’ he became a founding member of the regionally popular all-original band ‘FREE FALL’ touring regularly thru  Southern California largely as a result of his efforts.
Locating to Northern California, he found the best players and became the foundation of the soulful blues/rockers The El Dorados’ who would soon be voted the best band in Monterey! Not just content to ‘keep the beat,’ this master craftsman is an active participant who interacts with the other musicians. His very high standards of quality elevate everyone, and his performances reflect the unbridled passion he brings to Monterey County Line and life in general.