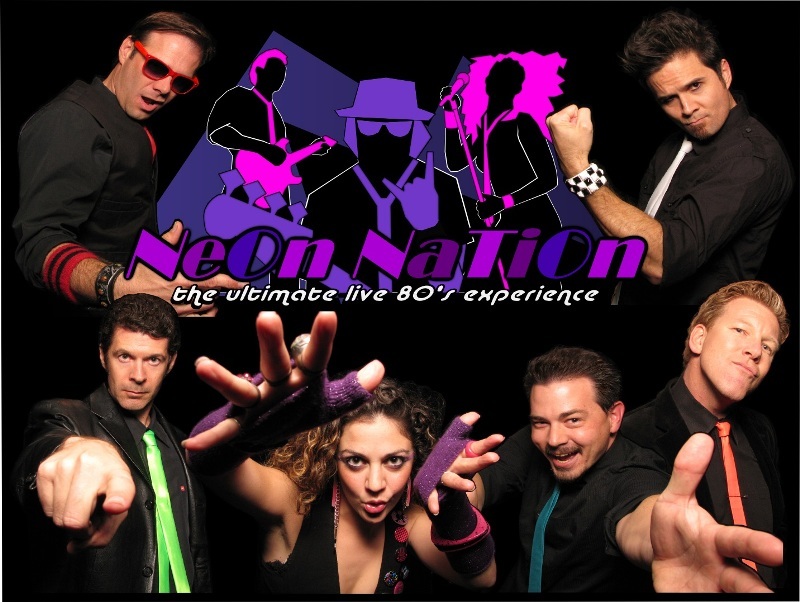 Our extensive resume includes performances for NFL and New York Jets quarterback Mark Sanchez TransAmerica, Latham &Watkins LLC, Abbot Labs, The Orange County Bar Association, Medtronic, DPR Construction, Christopher Reeves' “Charity LifeRolls On,” and appearances at such destinations as The Palms Hotel, Resort and Casino in Las Vegas, House of Blues-Anaheim, House of Blues- San Diego, The Montage Hotel in Laguna Beach, The Westlake Four Seasons, The Grand Del MarHotel, the Pelican Hill Golf Club and Resort, and The Standard- Downtown L.A.With 6 lead vocalists, including one female singer, Neon Nation's family-branded entertainment rocks a wider selection of 80shits than any other 80s band, and recreates them just like people remember them. But don't take our word for it!

Here's what some of our clients have to say:

Summer Concert, Lyna Thoeun, Recreation Coordinator, City of Chino Hills
Not only are they professional and easy to work with, Neon Nation helped kick off our 2008 Summer Concerts in the Park in afun, energetic, clean, family-oriented style of entertainment – the 80s way! They sure know how to get your crowd moving!We customarily do not ask a band back twice in consecutive years, but we've already booked Neon Nation for 2009!

Corporate Event, Gordon Wangers, President, The Young President's Organization
Again, GREAT show. It was a perfect evening. Neon Nation's show and material were absolutely ideal for the demographics ofour membership. They LOVED it, obviously. When's the last time guys were tossing cash at you to, and singing, as JacksonBrowne would say, ‘Stay. just a little bit longer.' Hope your bandmates enjoyed it as much as we did. Thanks again so muchfor being so reliable and ‘un-musician-like.'

Wedding, Paul and Kristin Janes
While their professionalism and reliability were second to none, I think what impressed me more than anything else was thepassion with which they approached performing at our wedding. Their unbridled enthusiasm led to a performance that wasnothing short of unforgettable. Needless to say, we would highly recommend Neon Nation to anyone looking to have themost unforgettable wedding experience imaginable. Passionate about their performance, extremely dependable, and a joy towork with and to be around, they were undoubtedly the best vendors that my wife and I employed. We will be forevergrateful