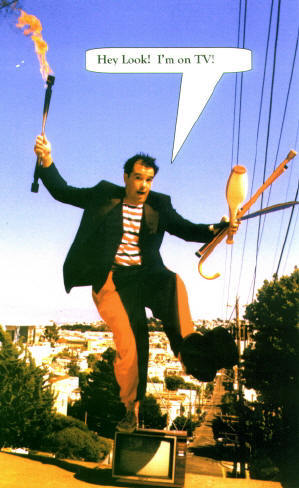 Based in San francisco CA
stand up comedy, juggler, comedian


Rocketed to Earth as an infant from the dying planet Krypton--Oh wait! That's someone else's bio.

Owen Baker-Flynn was born on a small island off the coast of New York. Manhattan! And he's been writing better jokes ever since!

He attended The University of Rhode Island and Rhode Island College, majoring in Theater. He studied mime at Marcel Marceau's Mime School in Paris.(The actual French name for the school has been lost to antiquity.) He studied acting at the American Academy of Dramatic Arts in New York City as well as the Jean Shelton School in San Francisco. Along the way he has picked up all sorts of extraordinary skills such as juggling, hat tricks, devil sticks, fire eating, and jelly bean spitting. Only a relatively recent college graduate, he also studied Emergency Medicine at City College of San Francisco. Currently he takes Voiceover classes at VoiceTrax San Francisco in Sausalito.

Owen Baker-Flynn has been performing in the Bay Area with annoying regularity for over twenty years. He has also been seen on TV and in the Movies, as well as corporate videos. His wife is an award winning teacher at Alvarado Elementary School in San Francisco and is a Certified Lunar Rock Handler. Along the way, Owen has won awards in mime and cartooning. He has two children, a 12 year old daughter and a six year old son who tolerate his existence.