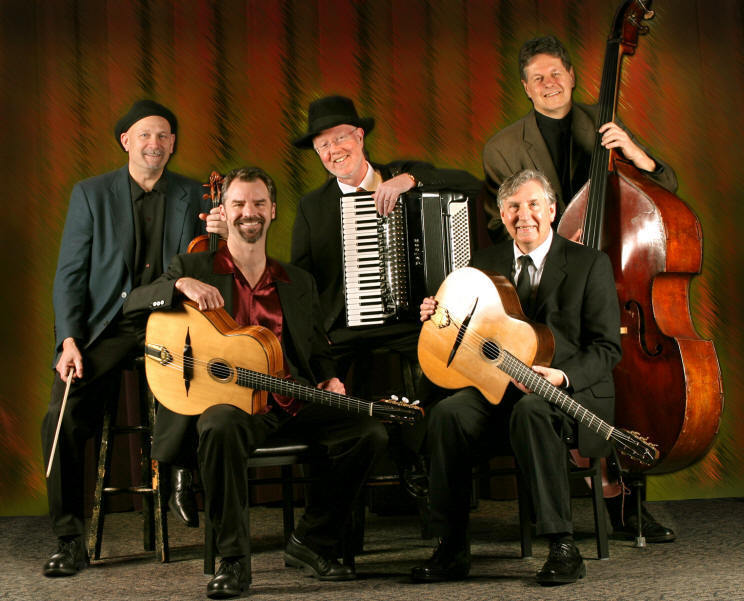 
If you are looking for something special, something with verve and panache . something that will dress up a special event, compliment a reception, or add just a touch of the European to a wonderful evening. Consider the music of Pearl Django!

Entering their fifteenth year of performing Pearl Django continues to be one of America's most respected and busiest Hot Club style groups. Though still strongly influenced by the music of Django Reinhardt, Pearl Django's repertoire now includes many original compositions. Their music reaches out across the divides of taste to a wide variety of audiences. The band's fervent followers include Django Reinhardt and Stephane Grappelli fans, guitar enthusiasts (and guitarists!), lovers of string music, including bluegrass devotees, who relish nimble, clean, intricate picking, "world music" fans drawn to French and Gypsy accents, plus jazz buffs and aficionados of the new swing music. Transcending simple categorization, Pearl Django packs in enthusiastic audiences at dancehalls and nightclubs, at folk music festivals and jazz festivals alike.

The group's inception was as a trio in Tacoma, Washington in 1994. The focus of Pearl Django was, and is, to incorporate the music of Django Reinhardt and Stephane Grappelli with American swing music. They quickly expanded to a quintet, adding a violinist and a third guitarist. An interview on NPR's All Things Considered in 2001 brought the group to national attention. Currently Pearl Django is working as a quartet, occasionally performing with guest artists. All of the members are contributing original compositions to the band's expansive repertoire. They have released 7 CDs to date with number 8 due in the spring of 2005. In June 2002, Pearl Django performed at the prestigious Festival Django Reinhardt in Samois sur Seine, just outside of Paris, France.

“If Paris is the city of love, then Pearl Django's music is the flirtatious accompaniment.”

— (review of Under Paris Skies)

Voted favorite area jazz band 2003,by Seattle Weekly readers!
"Pearl Django play(s) gypsy jazz. and they do it with such verve, skill and pleasure that they're pretty much irresistible to jazz and non-jazz listeners alike."
—Seattle Weekly