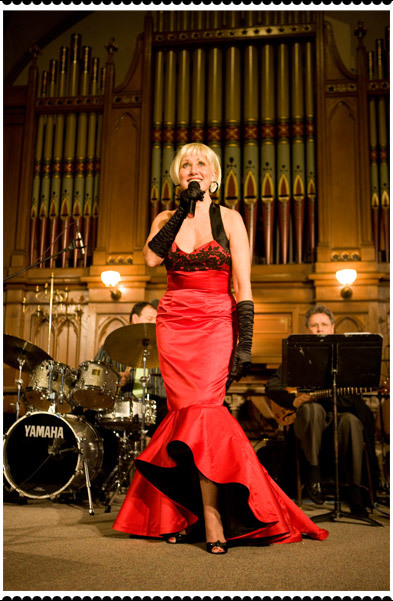 LUCIANA LOPEZ, music reviewer for the Oregonian dropped by Linda Lee's debut at Tony Starlight's where she and the band play Peggy Lee sets on Thursdays in April and May. Luciana wrote:

". SHE HAS A STRONG, EXPRESSIVE VOICE, well-suited to the kind of flirtatiousness in Lee's music. The torchier songs and the mid-tempo swing pieces both sounded great, and Michelet's love of the music was clear."

A friend of mine is doing some publicity work for Linda Lee Michelet and invited me out to see her tonight. I hadn't been to Tony Starlight's yet, so I figured, sure. (And yes, this is my full disclosure paragraph.)

Michelet sang two sets of Peggy Lee tunes, backed by an eight-piece jazz band (at least two members of whom -- Tim Jensen on sax and Lars Campbell on trombone -- are also Portland Jazz Orchestra members). Michelet is still relatively new to performing, playing out for only a couple years or so, but she has a strong, expressive voice, well-suited to the kind of flirtatiousness in Lee's music. The torchier songs and the mid-tempo swing pieces both sounded great, and Michelet's love of the music was clear.

What really floored me, though, is that Michelet is 61. Sixty-one. Not to make a big deal of that, but I would never have guessed her age, neither from looking at her nor especially from listening to her. She made some major changes in her life around the age of 56, and I'd say the shift has paid off handsomely. The performance had its hiccups (the super-bright spotlight in her eyes was an obvious hindrance, as were the tight quarters of the restaurant, though the wait staff was excellent at keeping on their toes), but Michelet was always enjoyable, always personable, always a solid musician.