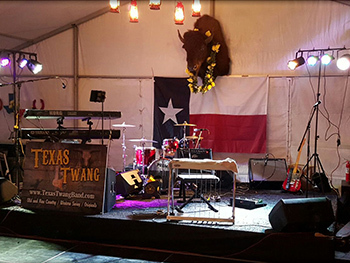 
Featuring The Route 66 Band and the Texas Twang Band

From Houston, Texas comes the classic sounds of Roy Lee & The Route 66 Band. Listeners will dance to ageless music mixed with current hits. The Route 66 Band is popular not only because of its great sound, great vocals and complex harmonies, but also because of its wide variety of music, providing something for everyone. Although primarily known for its dance music, Motown, and classic rock, the band also provides something for everyone including pop, Blues, 50s, 60s, 70s, 80’s,  some current hits, country, standards or dinner jazz. The Band is a self-contained group providing state-of-the–art sound reinforcement ( 80 folks to 2,000) and lighting, an a large collection of music during breaks, with casual to formal attire to suit any occasion. Their presentation, professionalism and attention to detail complete the package guaranteeing the best in live entertainment.

We also have available one of our fantastic Female Vocalist, Sax, or an entire Horn section for your event if you so desire.

First and foremost, Roy Lee would like to thank you for your interest in booking Roy Lee ( Single Duo or Trio ) The Route 66 Band or Texas Twang for your event. We have been entertaining audiences since 1997' with the greatest of success. Our unique blend of great musical selection, exceptional musical abilities with the lastest use of keyboard technology, stage energy. and fun are what separates US from your typical party band. We look forward to entertaining you in the very near future.

For weddings we traditionally entice the audience to dance to crowd favorites from the Motown era and other songs from the 50's thru the 80's. Earlier music selections will be more instrumentals and jazz numbers, while later selections will be aimed at a more dance crowd. Remember, our goal is to please everyone in attendance, and we've found this approach to be very successful. It is our goal to make sure your evening of fun and dancing is not only the one you had in mind, but one that you and all of your friends will remember for a long time to come.

From Moe’s in Katy‚ to Kicks Club‚ and the Armadillo Ballroom ‚all located in south eastern Texas‚ to Borrowed Money‚ Dallas TX‚ to Jitterbugs‚ Nacogdoches‚ TX‚ and from The Louisiana Hayride‚ and Fools Gold in Alexandra‚ La. during the 1990’s; Roy Lee and has opened for Ronnie Millsap‚ Restless Heart‚ Billy Dean‚ Shenandoah‚ Leann Rimes‚ Rick Trevino‚ and many‚ many more.

Whether its keyboards‚ vocals‚ guitar‚ or front–man/leader‚ this Louisiana native‚ Roy Lee‚ combines his compelling stage presence and talents to continue to be a major market musical contender.

The stage is just like home for Roy Lee‚ as well it should‚ performing came to his life at the age of 5 singing “TheLord’s Prayer” in a church where his dad was musical director. He quickly progressed to guitar‚ trumpet‚ and playing piano later in his teens.

After relocation from Louisiana to Houston‚ Roy’s musical expertise began to blossom. He joined the house bands for several major county dance venues over the next 5 years playing with such artists as Crystal Gale‚ Moe Bandy‚ Joe Stanpley‚ Earl Thomas Conley‚ John Conlee‚ Jon Anderson‚ Lester Flat and Earl Scruggs‚ Gene Watson‚ Roy Head‚ the late Ernst Tubb and many more. 1981 Roy joined with Houston Artist and studio musician Randy Cornor‚ whereby he was front man and ran the band ‚ with lead vocal duties when Randy was not on stage.

During this same time he work numerous sessions as session leader/engineer/producer at some of Houston finest studios including Gilleys‚ Rivendell‚ Limelight‚ and Sugarhill. At Rivendell he played mostly non secular tracts with a now well–known producer/engineer Brain Tinkersly.

In 1987‚ the Louisiana Hayride came calling‚ and Roy joined the team as lead vocalist‚ arranger‚ keyboardist for the show for almost 1 year until its closure. This was the 2nd longest running LIVE radio show ever at the time‚ live to 30+ states and 15 foreign countries. The band learned 20 songs per week for the live shows on Sat with a matinee Sunday Southern Gospel show. At the conclusion of the show Roy wrote‚ recorded‚ arranged‚ and co–engineered his only album project after his mother’s passing.

Returning to Houston‚ he auditioned for a major show in Branson but declined as he has 2 left feet and can’t dance. For about 5 years after this he ran a very hot top 40 country band Austin‚ that played major shows across the south and worked at Limelight recording as producer/arranger/keyboardist/vocalist till he retired from studio work in 1995.