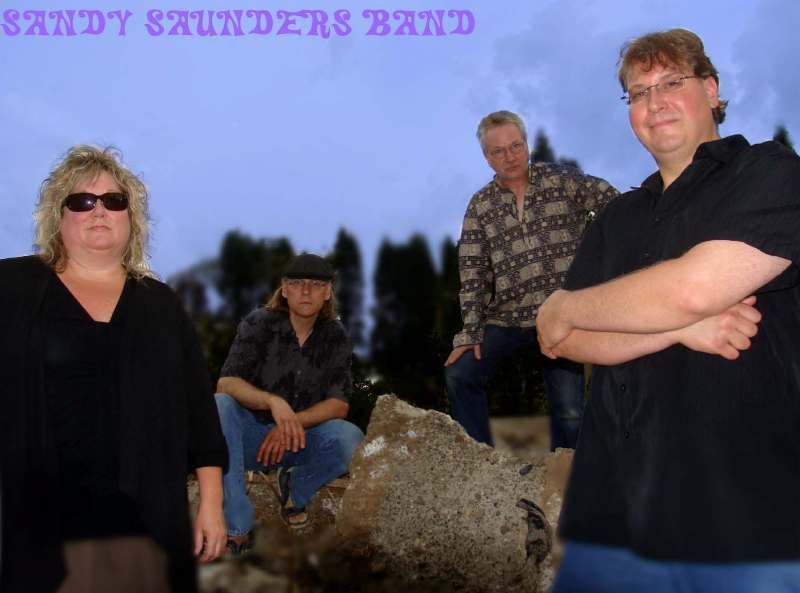 In September of 2012, Sandy Saunders Band was named as one of the top 5 bands in Oregon at the “Rock-U” exhibitof the Oregon State Fair. On November 12th the bands current single “Rattlesnake Road” made it's radio debut onWELW, Detroit. Since then it's been heard around the world. In January of 2013 the bands 1st full length studio CDwill be released and is already getting great press reviews from pre-released singles, And in the year 2010 the groupplayed an impressive 113 live shows throughout the Pacific Northwest. All this is strongly due to the fact that theSandy Saunders Band, lead by Augusta, Georgia native, Sandy Saunders, is a group of truly world class musicians.

Upfront, Sandy is known as a person who pours her heart and soul into every performance and every recording, sheis not only a powerful vocalist and guitarist, but a first class entertainer that will bring crowd to its feet and keepthem there throughout the show. Sandy's high energy show closes the gap between country-rock, blues-rock andgood old pure rock & roll. Sandy's performances have been described by the press as “..smooth and hypnotic” ,“..very, very special”, “..Sandy has a voice made to be listened to.” and. “You will never forget the on-stage feel ofpower, soul, and passion that comes with the Sandy Saunders Band” stated one NW music review magazine.

Alongside Saunders on stage is Glasgow, Scotland's Billy Lindsay. Positively Entertainment magazine once wrote:“There seems to be a perfect balance from the power vocals of Saunders and ultra tasty guitar licks from Lindsay, inevery song they play.” It went on to say: “We don't know if its the southern influences or the U.K. Heritage, butthere's something in this combination that makes this band stand out from the rest.” One Australian radiopersonality and reviewer said “the instrumentalists are incredible-perfectly matched to Sandy.”

The Sandy Saunders Band's rhythm section is made up of Scott Cwalinski on drums and Jeff Woodcock on bass.Scott joined the group after making a name for himself as one of the top drummers on the Las Vegas strip, wherehe spent 14 years playing alongside countless headliners such as Joe Walsh and Pat Benatar, just to name a couple.Bassist / vocalist, Jeff Woodcock, is also known as a top pick bass player in the Northwest on stage as well as in thestudio. Jeff's vocals are a perfect complement to rest of the band.

TESTIMONIALS
. .You will never forget the onstage feel of power soul and passion that comes with the Sandy Saunders Band. .Positively Entertainment Magazine


“. Just listening gives me goose bumps. ..I want more of this lady and her band”
-Wendy Rudin, music reviewer/radio personality


Sandy and the guys rocked it last night. Was great to see a full house and WOW they were up
dancing on very 1st song!!!. .Cat McGinness, Entertainment broker, The Springs, Vancouver WA.
As a venue owner that hosts 150+ acts per season, it is a pleasure to work with the professionals that
make up the Sandy Saunders Band. . Performed beyond expectations. Hope to have them again. .
Steve Demarest, Der Hinterhof, Leavenworth WA


“Watch this band as they drive the future of the Northwest rock scene”. .Robert Parks, indie music
Reviewer

"Sandy and her band played quite regularly in my bar between 2007-2009. Of all the entertainers
I've had on the stage, Sandy's band was definitely a top contender. Always a tight-clean act, and she
continually brought a lucrative crowd to my establishment. Les Martin, Owner BETHANY VILLAGE GRILL
"One of the Northwest's BEST!". . KATU .com

As a representative of the Relay For Life in Oregon City, I would like to send a hug