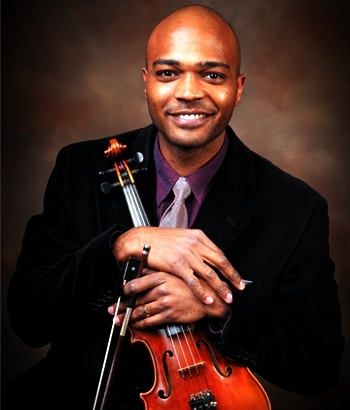 Based in Chicago Il
variety music, all styles from the 1940's to now, violin, jazz, classical, strings


Samuel "Savoirfaire" Williams is an internationally known Jazz Violin Legend. Born and raised in Chicago IL. , Samuel is a classically trained Violinist who grew up in Churches improvising to Gospel Hymns and South Side blues themes. Samuel has carved out a niche as a Chicago Avant Guardist, having been voted into the Internationally Acclaimed Elite Jazz Organization AACM. This is where his heart lies as a Composer and Master Improviser of Modern Music. Nevertheless Samuel continues to perform local Chicago venues in more traditional Jazz settings.

Samuel has also managed to maintain a professional level of Classical Repertoire performing wedding ceremonies ( From ( Schubert's or Bach's Ave Maria to Vivaldi's Four Seasons to Bach's Unaccompanied Violin Sonatas and Partitas as well as the Bach Suites for Cello arranged for Viola ). Samuel is also known in the musicians circle as an uncompromising artist who may show up as a featured guest Artist at Chicago's most coveted Studio Recording Session ala CRC (recording Studios) or you may see him Performing at The Museum Of Contemporary Art as a Specially invited guest Soloist to Symphony Center as a stand in for better known Classical Violinists.

Because of this affinity for ubiquity he is known as Savoirfaire nicknamed after a Cartoon Mouse in the Klondike cat Series. If that wasn't enough to add to the Lore of the “Artist” Samuel has continued to "Busk” (Public Service through Public Art Performance). Samuel may be seen busking at O'Hare Airport, or on Michigan ave near prominent Chicago Landmarks. He began Busking after having been exposed to the concept in Europe while on tour with Nicole Mitchell's Famed Chicago Free Jazz Group - “The Black Earth Ensemble “. When you book Savoirfaire you will be sure to get quality music but you are also booking a Legend which guarantees your event to be not only memorable but a Historic event!