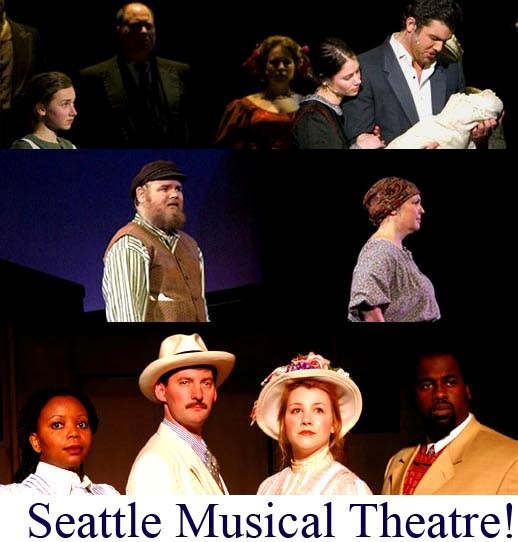 
Seattle Musical Theatre can bring 4-6 performers presenting the best in musical theatre with piano accompaniment. All have extensive performance experience in many Northwest venues including the 5th Avenue Theatre and Village Theatre as well as Seattle Musical Theatre (formerly Civic Light Opera). Some of our shows Include excerpts from such classics as Guys and Dolls, The Fantasticks, Camelot and Anything Goes as well as beautiful songs from lesser known gems such as Ragtime and 110 in the Shade.

How did it all start? Thirty-two years ago, a group of Seattle opera enthusiasts decided it was time to produce some lighter fare than what other local companies were offering and Civic Light Opera was born. Although the productions were sound, the audiences who attended the operettas were really in the mood for good old American musical theatre – and by 1980, there were plenty of wonderful offerings to choose from. The third season of CLO included Man of La Mancha, Carousel, and Kismet and began our long tradition of presenting the very best of the genre.

From that time forward, the name Civic Light Opera was considered a misnomer by some, since the company no longer performed operettas. Following many years of discussions, in 2006 the Board of Directors changed the name to Seattle Musical Theatre.

The original home of Civic Light Opera was the James Adams School Theatre in Lake City where the company performed for 25 seasons. In 2002, the company moved to the Shoreline Community Center, but when Seattle's Magnuson Park theatre became available in 2004, Civic Light Opera chose to relocate back to the NE Seattle community to be closer to our many subscribers and supporters.

The company recently signed a long-term lease with the City of Seattle and the Seattle Parks Department. Facility renovations to bring a state of the art venue to Magnuson Park are well into the planning stages.

Today, Seattle Musical Theatre is the only local theatre that produces strictly musicals. The company has gone beyond the standard repertoire to present Northwest premieres including Into the Woods, Evita, Ragtime and most recently, the critically-acclaimed Jane Eyre, the Musical. The company also seeks to produce shows that are not often seen by musical theatre audiences. .

Our upcoming season offers something for everyone and we would love to have you share in the experience and the magic of live musical theatre. Please join us or invite us to bring our travelling troupe to do a customized show for your group or special event!