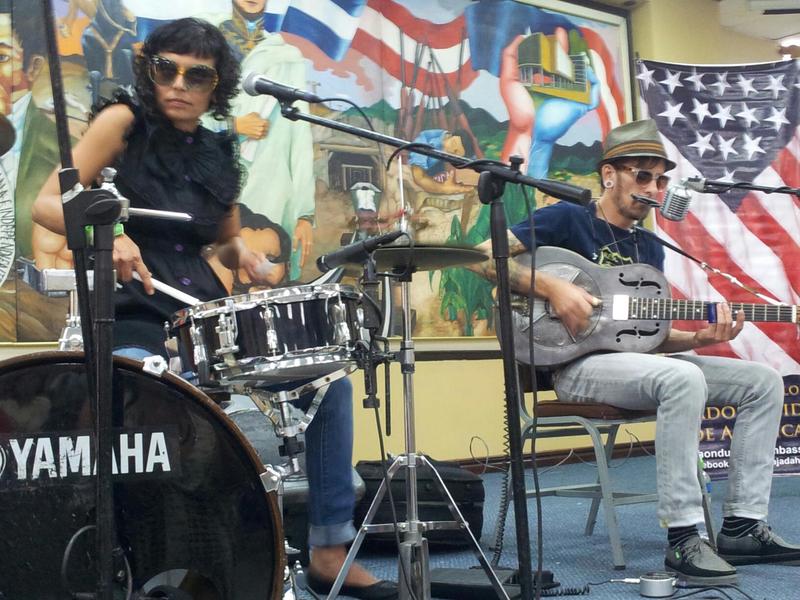 Based in Portland OR
blues music, blues


Sidestreet Reny & Lil’Bell are something, well, unique. He’s a beautiful guitar player, really squeezing every drop of soul out of that tinny, wild-sounding instrument with the metal pie-plate top. But he’s a helluva a singer and songwriter too. And he comes at it from his beginnings as a rap artist, so his songs tend to have a modern-zeitgeist, social-protest bent (lyrically), coming at you through that gut-bucket, gut-wrenching ’30s resonator guitar sound that feels dirt-poor, mad and about 100 years old. It’s an odd mix. When Reny really gets going, he stomps his foot in a frightening, raise-twist-slap-down manner that makes you fearful he’ll break something (like his ankle). Reny’s wife, Lil’ Bell, really is lil’ (about 4 foot 11, and all of maybe 90 pounds). But she can play the drums like a ring in a bell and sing like a bird, the perfect accompaniment to Reny’s spare, brimstone performances. Somehow they manage to forge their own sound and push musical boundaries in an era when many other musicians strive to sound the same.

Over the years Reny has traveled extensively and shared the stage with many acts such as A Tribe Called Quest, Gang Starr, Xanax 25, Bass and Trouble, Culver City Dub Collective, Paula Fuga and Ice Cube just to name a few and played at festivals and clubs throughout Scandinavia, Germany, and the U.S. Reny (aka J-sun or Jason Fine) has been featured on various international remixes and albums/singles including Brian McKnight - I Can't Go For That, Vanessa Williams - The Comfort Zone remixes, Inner Circle - Bad Boys remix and a string of European releases. Reny has also accumulated an impressive back catalog of songs and recordings including 5 commercially unreleased cd's and Mp3's (available online only).