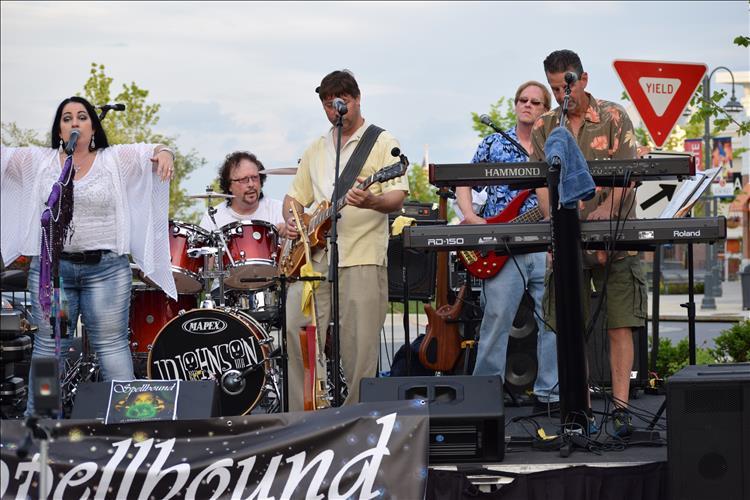 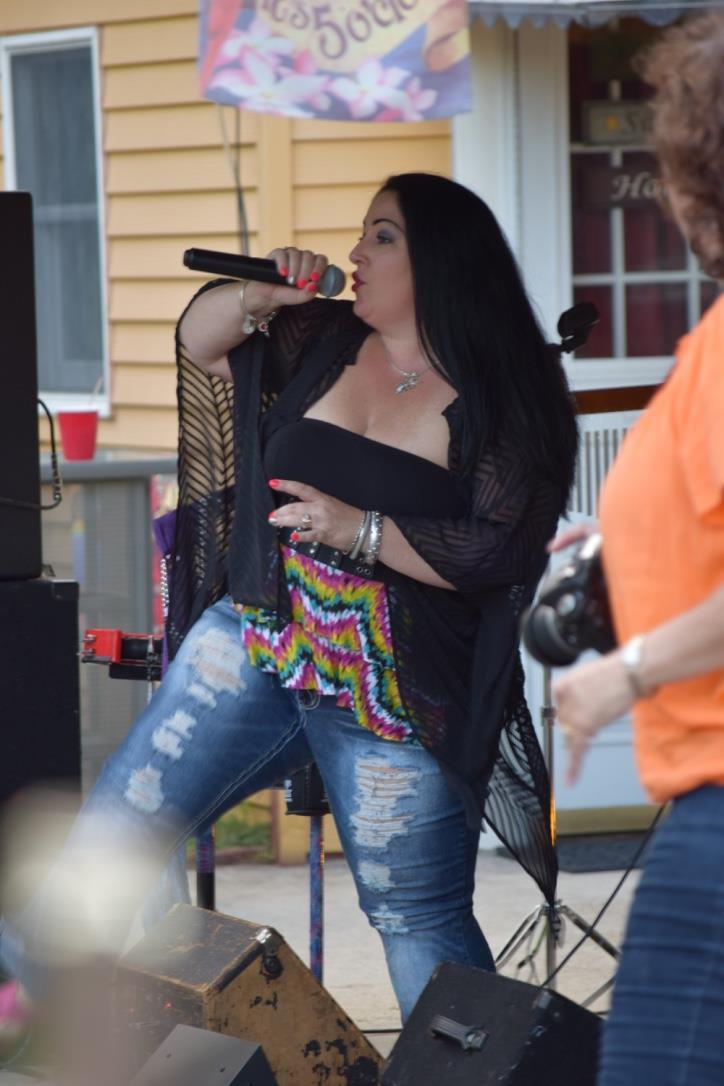 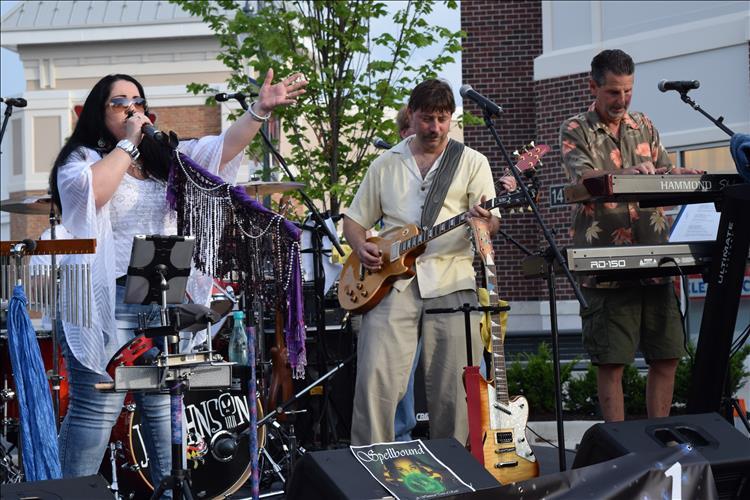 Based in Odenton Maryland
variety dance band, all styles of music


SPELLBOUND is MD’s Coolest Rock Band! A Five-Piece Band complete with Thunderous Drums, Pumpin’ Bass, Blazing Guitar, Sizzlin’ Keys; and all topped off by Steaming Hot Vocals and Harmonies! Performing your favorite songs with some awesome, unexpected twists and surprises! Let us take you on an Exciting and Engaging Journey through music’s best times! From the Trippy 60’s, to the Hard Rockin’ ‘70s, to the Synthesizer-Laced Rock of the ‘80s, to the Anthems of the ‘90s, up to the of Today - AND Beyond! SPELLBOUND will have you Singing and Dancing along the whole time. SPELLBOUND is all about getting the crowd involved! Why is our show so much more fun and different? Because we are here to Party with YOU! We want you to FEEL the Music and Be A Part Of It! SPELLBOUND takes the show seriously, and strives to keep all audience members engaged. You won’t see these band members standing still for a moment, nor will you see that in the crowd! SPELLBOUND’s inception was based on the Feel the music; what moves the crowd, having a good time and having you coming back for more! Our shows feature cool stage lighting and smoke effects; adding to the unique experience that IS… SPELLBOUND!

Don’t Miss The Best Party In Town – YOUR Party with SPELLBOUND!We tailor our sets to suit your crowd. You want Edge? You want Hard? You want Loud? You want Cool? You want Laid-Back? You want Acoustic? You Want It ALL? You Name - We Can Do It! We perform Fun, Exciting, & Rockin’ Shows at venues like: Nightclubs, Bars, Restaurants, Fairs, Festivals, Concert Series’, Legion Halls, Weddings, Corporate Events, Private Parties, Theme Parties, Bull Roasts/Dances/Themes, Casinos/Hotel/Resorts, etc.

High-Energy Danceable Rock & Variety Band for all events and venues. Performing with strength and edge, an exciting variety of songs that span the last five+ decades! SPELLBOUND is all about great music, exciting performance, audience engagement, and an overall memorable experience.

We mix up all the best songs to keep you singing and dancing all night.

Here are just some of the hits you'll hear in the mix:

Suzie's love for great music comes through in her voice, and she’s fronted bands for many years.  She’s been singing since she could speak and her energy peaks when surrounded by a great audience.  Suzie is inspired by her many favorite singers and bands of all styles & genres like Heart, Fleetwood Mac, Journey, Linda Ronstadt, Led Zeppelin, Jefferson Airplane, Chaka Khan, Prince, No Doubt, and many others, but especially her Dad; who is her personal tribute.  Suzie’s taste runs the gamut and she loves "a little bit of everything.”  She sings it all and encourages the crowd to share her enthusiasm.  She relates to the “feel” of songs and the emotions they invoke.  Music has always been a major part of her life growing up, especially with her Dad as her favorite rock star!  From rocker chic, to hippie chic, to balladeer – Suzie becomes the song.

Chuck grew up on music and at the age of 3, his parents bought him his first record, Sonny & Cher’s ''The beat goes on'' ( How Ironic?).  Then he received The Carpenters’ album ‘”Close To You.” “My Dad would bring home 45's from bar jukeboxes; everything from country to pop. I started beating on pots and pans as a baby. I got toy drums from my grandmother, then a Royce snare drum from my Aunt at the age of 9. My first experience with Rock music, was by KISS. I heard Peter Criss perform his drum solo on KISS ALIVE '' 100,000 YEARS'' and knew I wanted to play drums. I then discovered Neil Peart and RUSH and it was all over. Neil made me want to be the best drummer I could be, and RUSH are my all-time favorite band and Neil Peart my main drumming influence. My other drumming influences include Jeff Porcaro, Steve Smith, Stewart Copeland, John Bonham, Buddy Rich, Terry Bozzio, Keith Moon, Carl Palmer and Myles Evans, who was my drum teacher and is a close friend. I have been playing drums for 35 years.”

Danny has been playing guitar in bands in the Baltimore / Washington area for more than 25 years. His versatility has been seen in a number of groups and different styles of music, including rock, blues, metal and even classical.  Jays main musical influences include Jimmy Page, Stevie Ray Vaughn, Randy Rhodes, Dickey Betts, and Jimi Hendrix. Jay mainly plays Gibson guitars through Carvin all tube amplification.  Danny is so accurate on his guitar skills, and his solos are pretty awesome!

Ken Miller – Keys & Vocals
Ken has been playing professionally in the mid-atlantic area for over four decades.  As a composition and voice major at Baltimore County Community College & Towson University.  Ken honed his skills early on as a powerful voice in the area.  During his career, Ken has worked with National touring acts such at The Four Tops and played on local television shows such as the “Kirby Scott Show.”  Ken went on to hone his keyboard skills as a studio musician at the famous Gunn Studios.  He has performed at Local clubs, wedding, private parties, and piano bars for over 40 years with groups such as The Coachmen, The Startones, Turn Blue, Used Parts, Eclipse, Sterling Rust, Bobby and The Believers, and JukeBox Live. Ken utilizes various keyboards from Roland, Korg, and Alesis  in his performances.

Scott has been playing the local Maryland Band circuit for many years.  He’s always been a popular, sought-after bass player, and is known for his amazing energy and passion for performing.  Scott does way more than just keep the bottom end of the rhythm going; he adds those sweet accents and funk flecks that keep you movin’ – plus the cherry on top is the added harmonies & vocals!  You’ve got to see and hear him live on stage!  Scotty also adds another yet level of excitement to the band, keeping SPELLBOUND fresh in everyone’s mind well after the show.

George "The G Man," our George "of the Jungle" is SPELLBOUND's Sound & Light Engineer.  George has performed in bands for many years.  He was basically a Rock God in his prime band days belting out everything from Krokus to the Might Zep.  Now, he handles all the gear, boards, Sound and Lighting.  He handles the sound and light effects that create the Look, Sound, & that is The Magic of SPELLBOUND!  Suzie also refers to "G" as the "Magic Man," for this very reason.  He is also known to hit the mic for a song or two for fun; and even plays tambourines, maracas or klaves adding some cool percussion.