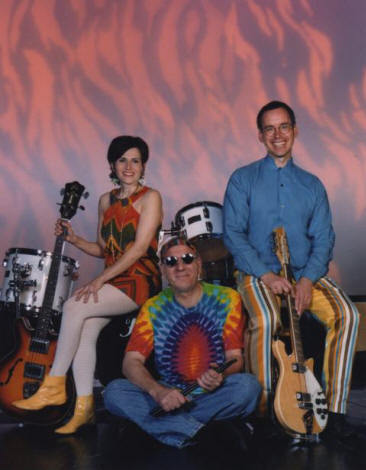 
50's, 60's, 70's Rock and Roll for Children and Families! SQUEAKY CLEAN was formed early in 1983 by Suzanne and Glenn. Their interest in '50s music was stimulated by the rockabilly revival started by Robert Gordon and The Stray Cats. They became a regular fixture on the New York City nightclub circuit and released an EP record in 1984 on Drip Dry Records. Suzanne and Glenn realized that their "Squeaky Clean" image might enable them to present rock and roll music to a wider audience. They arranged a series of rock and roll shows aimed at children and families in museums, libraries and parks. These concerts became a successful Arts-in-Education presentation about the history of rock and roll. The program proved so popular that the band members developed other programs about the 1960s. In addition, they were often booked to do concerts and dances outside of school hours. SQUEAKY CLEAN often performs the great music of the 1950s and 1960s for adults as well. Their authentic look and sound recreates the era when rock and roll was young. Their enthusiasm and fresh approach guarantees great entertainment for everyone raised on rock and roll. The trio's 1996 CD/cassette release "Rock and Roll Party with Squeaky Clean" was awarded a seal of approval by the Parents Choice Foundation.

In addition, SQUEAKY CLEAN was regularly seen for many years on Nickelodeon's hit pre-school TV series "Eureeka's Castle." SQUEAKY CLEAN always performs with a live drummer. Suzanne and Glenn have been fortunate to work some of the most experienced stage, studio and club drummers in the New York City area. In 2001, Suzanne and Glenn premiered their new program “How I Survived the Seventies,” a multi-media look at the decade through the diary of a teenage girl. The show features state-of-the-art animated computer projections, voice-overs by Suzanne and Glenn's daughter Leila and great 70s tunes by Santata, Al Green, Bob Marley, ABBA and Blondie among others. At the same time Suzanne and Glenn extensively reworked each of their existing shows, incorporating the projection technology and updating the presentations for today's audiences. Their current selection of shows includes “Rave On! The Roots of Rock and Roll””The 1960s: Decade of Turmoil and Triumph” “Growing Up Sixties” “How I Survived the Seventies” and “Family Night with Squeaky Clean”