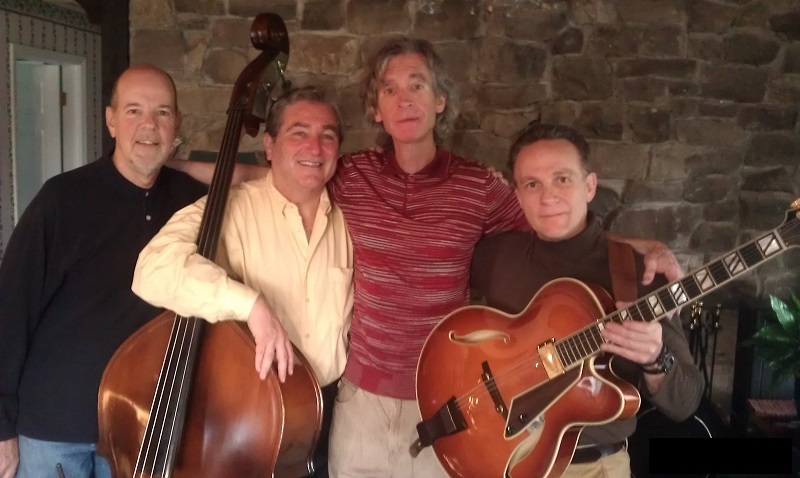 
The Steve Kaiser Quartet is a jazz band based in the NYC area. All members are seasoned professionals as performers and recording artists each with over 30 years playing experience in NYC and band's repertoire includes jazz standards with vocals, instrumental jazz standards, as well as original jazz tunes covering all genres of the jazz idiom.

The band consists of:

Guitarist Kevin Golden has been playing jazz for over 25 years in the New York City and Hudson Valley area. His style is reminiscent of Grant Green, Rene Thomas, Joshua Breakstone, and other jazz guitar legends.

Guitarist Golden is a musician who stands out as a fine player and has that hand strumming style (think Wes Montgomery) that is gentle when it can be and brutally powerful at the most unexpected moments.”. . . . . ..John Book, The Run Off Groove #214

“. . guitarist Kevin Golden whose pronounced play on the album makes him sort of the co-leader as his guitar shares much of the lead with Antonelli on the tenor. Co-written by guitarist Golden, “Golden Opportunity” opens up the program and this one features Golden, Antonelli and the drummer all delivering swinging solos.”. . . . .Edward Blanco, ejazznews

All About Jazz review for "Say What You Mean" original by Kevin Golden, March 2014 "Download of the Day". . ."Fast swinging quartet with stand-out guitar. Play when you need to do half an hour in ten minutes."

The critics rave: “A HELLUVA PIANO PLAYER” (Jazz Times). “(Lewis Porter plays) with a lively glitter and amazing sense of assurance.” “Mixing experimental with traditional, (he) plays up a storm.” “Porter is a deep thinker (whose music is) founded upon depth and cunning use of space.”

Lewis Porter is a jazz pianist and keyboardist known for a free and open attitude; he can contribute to any type of musical situation. His own groups swing like mad, taking a loose, open attitude to standard tunes and to Porter's own original compositions. Porter has appeared in concert with jazz masters such as Wycliffe Gordon, Ravi Coltrane, Joe Morris, Marc Ribot, George Garzone, Mark Dresser, Gerry Hemingway, Don Friedman, Alan Dawson, Joe Cohn, Gregg Bendian and many others.

Drummer Peter Grant was born and raised in New York City and studied at the Manhattan School of Music . Peter is a creative and versatile musician who has been in demand in the New York recording studios and clubs for 35 years. He has performed in venues ranging from Carnegie Hall and such clubs as the Blue Note to Royal Albert Hall in London and the Mount Fuji Jazz Festival In Japan.