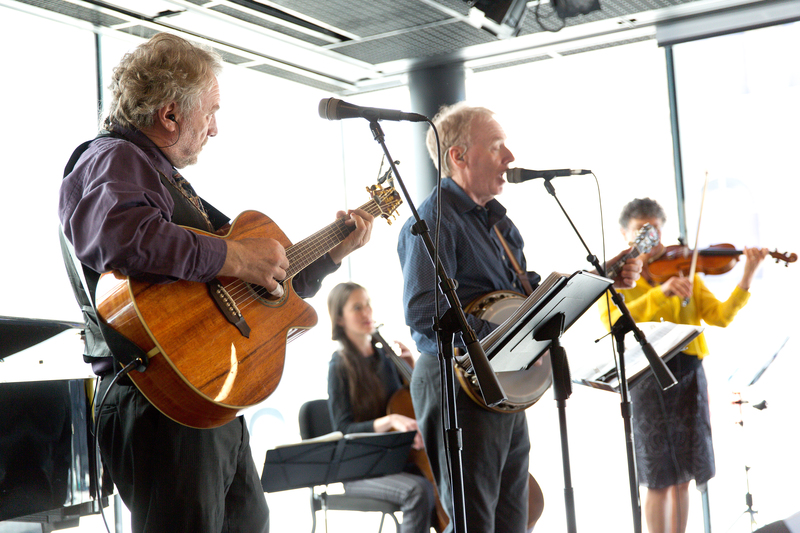 The repertoire of the Black Brothers is very broad and includes old Dublin street songs, music hall songs and historical ballads, songs from the Irish and Scottish traditions, along with songs by contemporary writers.

Shay and Michael are close harmony singers, with a special fondness for songs that include their audience in chorus.   We also perform with spectacular Irish dancers, always bringing exciting energy to an already fun show.

Their lively performances include up-tempo reels and jigs, along with mighty fine dancing and other surprises, which bring added excitement to every performance.  Each show is interspersed with stories, jokes and humorous childhood anecdotes, and audiences invariably leave their concerts smiling broadly and humming new choruses.  Joining the brothers on stage  are bandmates Eamonn Flynn on piano, and fiddler Bobbi Nikles, accomplished solo musicians in their own right, adding fire and excitement to the band mix.

Based in Northern California yet rooted in the folk and traditional music of Ireland, Shay and Michael Black are part of the renowned Irish musical family The Black Family and have been performers all their lives.  Their internationally famous sister Mary Black is touring again, celebrating the 30th Anniversary release of her early album “By the Time It Gets Dark”.  Their younger sister Frances Black has just completed an Irish tour, in between her duties as a Senator in the Irish Parliament, to which she was elected two years ago.

The Black Brothers Band is available for concerts, weddings and wakes, wineries, corporate events and more. Book us early for your St. Patrick's Day celebrations.