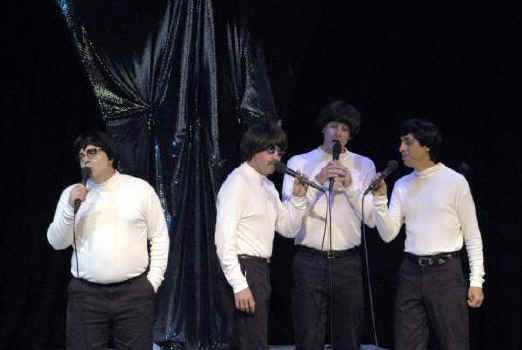 Based in Berkley CA
a cappella, singers

The EDLOS? Four guys who sing without instrumental accompaniment. A Cappella. What's with the name? The story they tell is that the name is an acronym for Excessive Decibel Levels from Outer Space, and that they are refugees from the planet "A" which circles the star Cappella in the constellation Auriga. The story goes on, but lets cut to reality here for a minute. These four classically trained guys; Eric, Larry, Ed and Craig were destined to take their schooling, talent and golden voices into the 21st century, always breaking new ground in their never ending pursuit of A Cappella diversity and originality. Speaking of diversity, the EDLOS have four shows to offer! Their critically acclaimed Variety Show, which consistently draws standing ovations, is made up of eclectic originals and familiar favorites. But that's only where the fun begins. The Bad Boys of A Cappella have a Country Western Show that's both contemporary and traditional, featuring hard-core country crooning and world class yodeling. Its a guaranteed smiler!Come the holiday season, the EDLOS deck the halls with a wide variety of harmoniously spirited songs, traditional and original with their very special Holiday Show. Their latest addition is the groovy 60's Show showcasing a variety of hits from the decade of Hippies, Flower Power, and the time when it was ok to just say "YES".. Besides these full length shows, the EDLOS show up many places and put on shorter versions of their show at fairs and festivals. Now when the EDLOS put on a show, its not just standing on a stage and singing the tunes. oh no. there are lights, smoke, costumery, tomfoolery, wigs and assorted mayhem, that all combine to make an unforgettable performance. One last point. Humor. These guys have a strong sense of comedy. No. Lets rephrase that. They are a crackup. They can't help it. Of course they do get serious occasionally. So check them out!