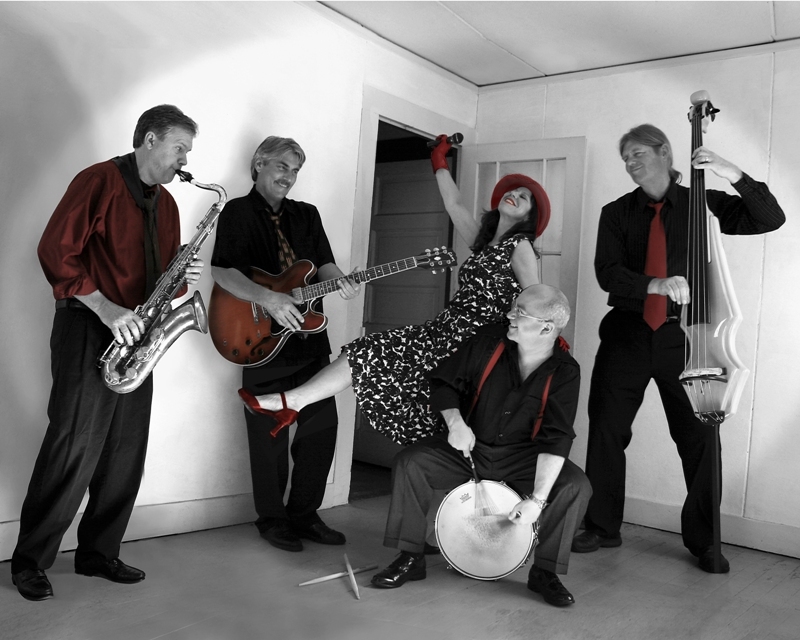 
A charismatic five piece group, the Jami Jamison Band will create a mood for mingling over cocktails and appetizers, relax your guests for the entree and dessert, then kick it up with energy, soul, and fun to dance your memorable event to a smooth finish. Performing jazz, blues, and swing, this band is a five star review. No matter what the size of your guest list, they are sure to appeal to young and old alike.

Here are some things others have written: .. I have had the pleasure of having the Jami Jamison Band two years in a row for my summer jazz series and they have done a fabulous job. I get more positive comments from my customers then any other musical group I have had. They start on time, have a classy look, very professional. I would highly recommend them. Doug Sweet Owner of Santi Resturant in Dry Creek Valley. We first met Jami Jamison at a restaurant they were performing at and immediately became connected to their music. Since that night we have made The Jami Jamison Band our Wineries house band. They have enhanced every occasion we have hired them for. A definite plus for the Jami Jamison Band. Thomas Fuchs President of Mosaic Vineyards and Winery. We have hired the Jami Jamison Band on many occasions. Whether it's dancing or just background music, they seem to have all angles covered. They show up on time, look good, and play great music. What's not to like. Laurel Agrella tasting room Manager for Mazzocco Winery. I've said it before and I'll say it again, Jami is the best undiscovered blues singer in the entire North Bay. J.M. Berry with the Sonoma Valley Sun. .


Bio
Singing for audiences since childhood, Bay Area Blues and Jazz vocalist Jami Jamison gets attention whenever she performs. It could be attributed to her smooth, sultry voice or her sassy style, but all agree her musical passion and vocal talents create an atmosphere that is always a crowd pleaser. Surrounded by four seasoned professionals, Jami and her boys can easily adapt to a wide variety of venues. From a black tie event to an intimate private party, Jami's performance will be one to remember.

California has given rise to many great guitar players, but few as melodic as Dennis Cordellos. Performing professionally since age 14 with training from Berkelee School of Music, he has developed a musical education evident in his original compositions. Having traveled nationally throughout his career, Dennis had the opportunity to perform with such notables as Paul Simon, Huey Lewis, and Norton Buffalo. Dennis's smooth style and articulate approach are consistent with the unique sound and feel of the Jami Jamison Band.

Performing for 50,000 screaming football fans at Busch Stadium every week could be daunting for some sax players, but not for Keith Ridenhour. Hailing from St. Louis, he enjoyed performing in Bob Kuban's Brass band for several football seasons. Keith attended Berklee School of Music, and later earned a teaching degree from the University of Missouri. He continues to teach sax and jazz improv here in the Bay Area. For the past few years, Keith's primary focus has been the Jami Jamison Band, which allows him to play his beloved jazz and explore his expertise in melodic, artistic improvisation.

"What is that thing?" is a frequently asked question of Kent Fossgreen at performances. "That thing" is Kent's eye-catching Knutson Messenger electric upright bass, which he alternates with his fretted and fretless Alembic 6 string basses. As half of the band's vibrant rhythm section, his 30+ years of performance experience are evident in the solid, tasteful grooves he adds to every tune. Kent studied jazz with Mel Graves at Sonoma State University and has performed with harmonica master Norton Buffalo, noted blues singer Earl Thomas, prolific songwriter Danny Sorentino, and many others.

Louisiana is home to delici