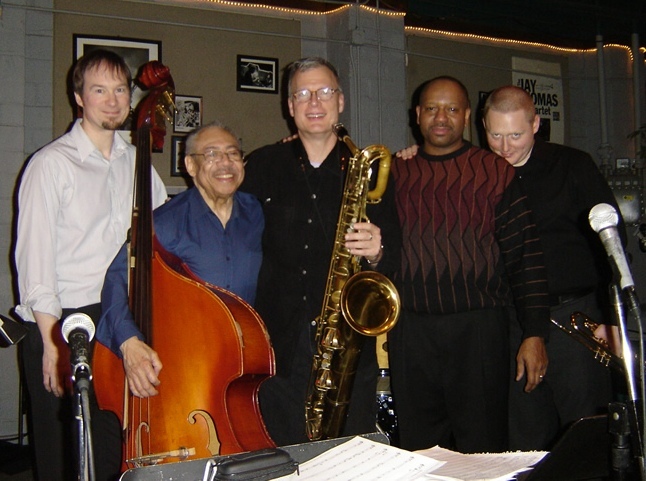 Jay Thomas, a native of Seattle, is a versatile multi-instrumentalist (trumpet, flugelhorn, alto, tenor, soprano and flutes). His music is eclectic, drawing on all musical situations in his life. His music could be described as lyrical without losing touch with the blues.

Jay's musical talent was recognized early on. While still in high school he was the recipient of a Down Beat one-year scholarship to the Berklee School of Music in Boston. From Boston Jay moved to New York where he frequented Village jam sessions and worked one summer with Machito's Latin band. Three years later he had added flute and tenor to his repertoire. Through the mid-seventies Jay lived and played with top musicians in the Bay Area including Jessica Williams. In 1979 he moved back to Seattle and became a frequent member of the house band at Parnell's Jazz Club working engagements with jazz artists George Cables, Charles McPherson, Bill Mays, Ralph Penland, Harold Land, Diane Schuur and Slim Gaillard and sitting-in with many greats as they traveled thru Seattle.

Jay can be heard on over 60 LPs and CDs. Blues For JW is Jay's eighth CD as leader and fifth release from McVouty Records. Jay's first two CDs, Easy Does It on Discovery Records and Blues For McVouty on Stash Records featured Cedar Walton and Billy Higgins. 360 Degrees on Hep Records (1995) and Rapture on Jazz Focus (1996) continued to establish Jay as one of the foremost players on the bop scene. Jay's previous CDs from McVouty Records titled Live at Tula's, Volume 1 and Volume 2 and 12th and Jackson Blues were live performances and have the feel of the after hours clubs where Jay first tested his jazz chops. Both gained high marks from audiences from Japan to Europe. Jay's two latest CDs with Becca Duran are: If You Could See Me Now, a showcase for Becca's blues and standards interpretations and Song For Rita, a trip to Brazil in the Getz/Gilberto tradition. Jay's other recordings run the gamut from hip-hop, acid-jazz, rock, Latin, big band and many small jazz groups. Current favorite releases are: two with Jessica Williams, Joy and Jessica's Blues and four big band recordings, On Going Home and Things For Now with the James Knapp Orchestra, Red Kelly's Heroes with the Ramsay/Kleeb Orchestra featuring Pete Christlieb and Use Us with Continued In The Underground Jazz Orchestra (Japanese big band). Jay is featured on the latest Bud Shank CD, On the Trail. This was the last recording by Conte Condoli and Jay is playing tenor and soprano sax in a sextet setting with Bill Mays piano Joe LaBarbera drums and Bob Magnuson bass and of course Bud on alto. Two recent recordings have Jay teamed up with jazz greats, Ray Brown (Blues for Dexter, Wolfetones Records) and Elvin Jones (Jones for Elvin, Hip City Records).

Jay has appeared in concert with the bands of Mel Lewis, Clayton-Hamilton, Maria Schneider, Bill Holman, Bob Florence and Frank Wess. He has played festivals at Wolf Trap with Red Rodney and Ira Sullivan, the Aspen Jazz Festival with Herb Ellis, Jake Hanna and Mel Ryne (recorded with them on Roll Call), the duMaurier Jazz Festival three times with Chuck Israels and the duMaurier again in 1996 and 1997 with the Jay Thomas Quartet.

Jay has toured Canada with John Stowell and also toured Great Britain with jazz legend Slim Gaillard recording there with Slim, Jay McShann and Buddy Tate. In the summer of 2002, Jay again traveled to Europe, this time with the Bud Shank Sextet featuring Plas Johnson. Jay has taken his group with Becca Duran to Japan several times, once representing Seattle in a jazz exchange and has been a regular member and featured soloist with one of Japan's leading big bands where he records and performs several times a year. Today Jay is busy performing, giving clinics, recording and teaching. With his wife, Becca Duran, they have a new group that blends jazz with many South American and African rhythmic traditions. Their new CD Song