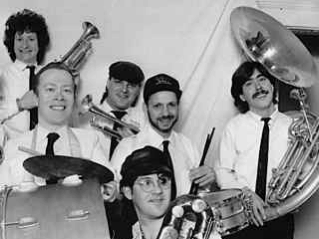 Hire us for your next Octoberfest theme party

The Oom Pa Pas were formed in Boston MA to play beer garden music. back in 1999. The band consists of members of the Hot Tamale Brass Band. We play German oom pah music in the Boston area for Oktoberfest celebrations and special events in the New England region.

Our German band is full of very talented musicians, we are fun and professional. Though we are mainly an instrumental group, we sing some rousing Bavarian choruses and invite the audience to sing along.

Oktoberfest is a sixteen day festival held each year in Munich, Bavaria, Germany, September trough October. It is spectacular event in the city and is one of the world's largest fairs, over 6 million people participate each year.

Beer plays a huge part in the fair, every festival begins with a keg of beer tapped by the Mayor of Munich who declares “O'zapft is!” or “It’s tapped!”. Special Oktoberfest beer is brewed for the festival, which is darker and stronger, in taste and alcohol. It is served in a one-liter-tankard called Maß. The first mass is served to the Bavarian Minister-President. Only local Munich breweries are allowed to serve this beer in a Bierzelt, a beer tent which is large enough for thousands.

Visitors also consume large quantities of food, most of it traditional hearty fare such as sausage, hendl (chicken), käsespätzle (cheese noodles), and sauerkraut, along with such Bavarian delicacies as roast ox tails. Other cities that are across the world also hold Oktoberfest celebrations, modeled after the Munich event.

We play Oomp Pah Pah in Boston, North Shore MA Worcester Massachusetts and South Shore Mass. Often seen in Providence RI and Newport Rhode Island. We have performed Bavarian music in Portsmouth NH, Laconia New Hampshire and and Portland Maine. Crazy times in Burlington VT and Montpeilier Vermont. Colleges love us and you will too!

The Oompa Pas were WONDERFUL!!!! I am going to email Mickey directly myself, but I wanted to be sure to send you my thanks for finding them for me. I couldn't have imagined a better band! best wishes,      Jeanet