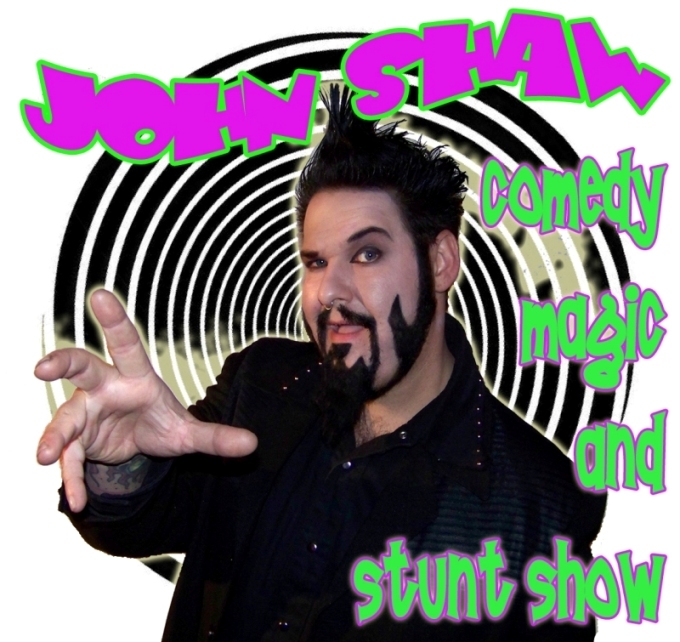 These two amazing entertainers have now joined forces to create a one of a kind comedy variety show. This show features classic and modern circus sideshow stunts, amazing magic & illusions, escapes, western bullwhip tricks, knife throwing, comedy, and audience participation into an edge of your seat THRILLSHOW! Unlike other shows they have combined some of the most amazing and over the top effects and stunts to create a show that has entertained thousands all over the world.

John Shaw started his entertainment career at the tender age of 8. He began like most young boys with learning magic. From there his interests grew to include escapes and then large scale illusions. Then one day he went to a circus with his family and he was selected out of the crowd to pull a sword from the performers throat. After that encounter he was hooked. That feeling of amazement never left John and he was then determined to learn all he could about as many different types performance styles as he could. He spent the next few years learning and perfecting many of the magic, illusions, & physical stunts that you see today. He regularly performs at fairs, festivals, nightclubs, tattoo conventions, and theaters around the world. John has been a featured guest on such TV shows as Ripleys Believe It or Not, The Tonight Show with Jay Leno, The Howard Stern Show, and The Billboard Music Awards to name a few. From his tounge in cheek side splitting humor to his trademark unique facial hair, one thing is for sure. ..your guests will never forget his show or his face.

Lady Diabla is an amzingly unique stunt performer and the worlds youngest female sword swallower. This lithe femme fatal got her start working with legendary showman Ward Hall on The World Of Wonders Show, one of the last 10 in 1 traveling sideshows in the world. She has traveled the world shocking and engaging audiences with her unique style and amazing skills. Lady Diabla was asked to tour with one of the largest music festivals in the world, OzzFest. Where she became one of the most talked about acts on the show. Lady Diabla has appeared on such TV show as National Geographic, Comedy Central, The New Gong Show, Taboo, and MTV's Pranked to name a few. She has also been featured on the cover of The Las Vegas Weekly Magazine, where she was voted one of the most beautiful people in Las Vegas in their annual pole. Wether on stage or off Lady Diabla stops people in their tracks with her tademark fire colored hair, modified pointed ears, and forked snake like tongue. She is one entertainer you will not soon forget.

The Original Synners Stunt Show Spectacular is a show not to be missed and you will soon discover for yourself why they are The Wonder Show Of The Universe!!!