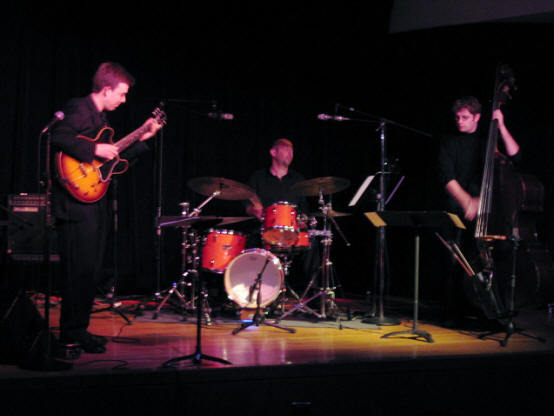 Viewing music through a wide-angle lens, Paul Hemmings blends elements of jazz, free improvisation, and world guitar influences to create a style that All About Jazz calls "remarkably fresh and a complete success." Based in New York City, Paul performs nationally and internationally as leader of The Paul Hemmings Trio, the dynamic guitar-bass-drum team he uses to interpret renditions of modern standards alongside his own original compositions. The group has released four albums on Leading Tone Records and has performed at venues throughout New York City and overseas in England, Switzerland, Australia and New Zealand.

In 2003 Paul recorded In & Out, his first release on Leading Tone. The album features the robust tenor saxophone of Eric Alexander and garnered strong reviews for its "superb renditions" of jazz standards and Hemmings originals.

His second release in 2006 was a marked departure: Sgt. Pepper's Lonely Hearts Club Band (Live!) was recorded at a concert where Hemmings and his trio performed their original interpretation of the classic Beatles album and saw the guitarist dig deeper into his bag of effects using pedals and samplers. The album saw widespread airplay on public radio stations in the US and in countries as far and wide as Columbia, France, Holland, and Australia.

The Trio's 2009 release, Letter From America, is a genre-blending collaboration with avant-garde saxophone pioneer John Tchicai that has also received radio airplay across the US and Europe. The album has been praised in the pages of Jazz Times and Cadence magazines and in 2008 was named "one of the year's best albums" by the Los Angeles edition of All About Jazz.

Their latest release, Standards, Vol. 1, is a collection of songs that showcases the standard repertoire of Gershwin, Jobim, and John Lennon, among others. Performed in a stripped down and intimate setting, the album is a contemporary nod to the traditional jazz guitar trio.

Aside from leading his own trio, Paul also leads The Uketet (his jazz ukulele trio), performs as a studio session musician, and plays in Broadway musicals. He is an active member of the guitar faculty at the Third Street Music School Settlement in New York City and has also taught at the National Guitar Workshop and Marymount Manhattan College.