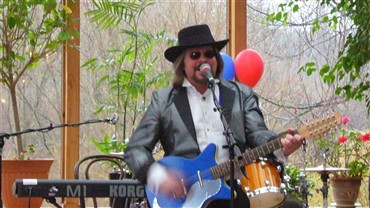 Robb Taylor has been on the stage with the likes of Roberta Flack, Chubby Checker, Charlie Daniels Band, Jerry Lee Lewis, Lynard Skynard, Molly Hatchet, and the Outlaws to name just a few. No longer just an opening act, there are major acts that now open for him as he captivates audiences with his band. No matter what your race or background, whether you're seven or seventy, his material is great listening music that you can't help wanting to dance and sing along to. Robb just got done recording a new CD entitled The Hourglass after the title song. All of the members of the band have the educational background, experience, and proven abilities necessary for the survival of any group in the concert and recording industries. And it's so obvious that they love what they do.

Robb Taylor and/or the Robb Taylor Band can perform solo work up to an 8 piece band. We are willing to travel through out the United States, and play at mostly any venue. Prices are negotiable with your representative.

The Robb Taylor Band plays a cross over kind of music from Country, Rock, Rock and Roll, and Blues. They play there songs from there two CD'S Ramblin On & The HourGlass along with the songs from there new CD which currently is being recorded, and will be named in the near future.