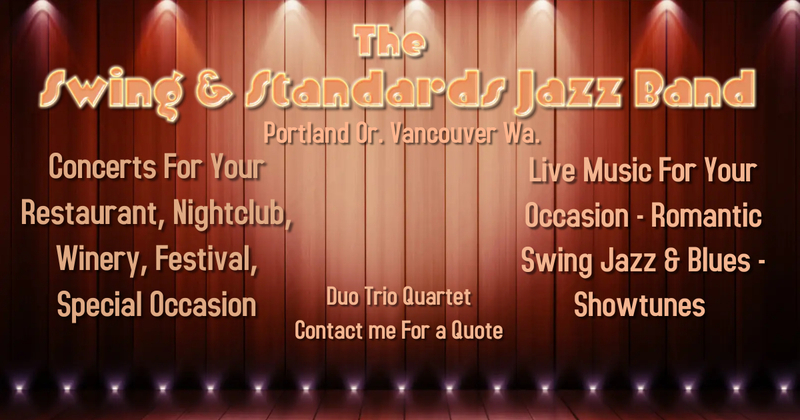 The Swing and Standards Jazz Band


We do Outside or Inside Concerts. The band plays Standards, Swing, Show Tunes, Romantic Melodies, Jazz & Standards. Melodic & Romantic Music is our specialty. Classic songs with Heart and Soul. We can play as a Duo, Trio, or Quartet with optional Drums, Saxophone, depending upon your space and budget requirements. The band has several player combinations available as seen in the videos below. We have many years of experience and can play a variety of situations (Concert, Restaurant, Winery, Festival). I always advertise our concerts & make flyers for display in local music guides online to invite people to your location. I post on several social media including

Bill Coones (Vocalist, Upright Bass) Bill has lived in the Portland Oregon area for many years and played music at local Night Clubs Restaurants, Winerys, and special occasions. He has a way of presenting the romantic side of the Standards uniquely his own and is a real crowd pleaser in his soulful delivery of classic tunes from Broadway Shows and the Jazz and Blues scene. Bill has appeared at the Mt Hood Festival of Jazz in 1988, Rose City Blues Festival and Waterfront Blues Fest numerous years among others in the area, and many local night clubs and restaurants. He also has played music Internationally in Canada and England. Only performs with the best in the genre as a Duo, Trio or Quartet. Bill has performed with many of the best: Tom McFarland, Pete Karnes, Dan Perz, Larry Adair, Janice Scroggins, Dan Donahue, Dave Howell and many more in past years.

Duncan Branom (Drums) Duncan has studied with Joe Morello, Ed Thigpen, Ray Mosca ,Roy Brooks, Jim Chapin and many more. A graduate of the Advanced School of Contemporary Music, Duncan has played with The Oscar Peterson Trio, Ray Brown, Dizzy Gillespie, Pepper Adams, Red Garland, Major Holly, Wilber Ware, Doug Wakins, Barney Kessell, Leroy Vinnegar, Peter Appleyard, Gap Mangione, Geoff Lee, Lou Perrine and many more. He is featured on many YouTube videos and is a well known Drum Teacher in the Portland Oregon area. “After going to the Advanced School of Contemporary Music in Toronto, Ca..I stayed in NY for a year and played with and hung out with, Pepper Adams, Doug Walkins, Billy Taylor, Wilber Ware, Red Garland, Joe Morello, Major Holly, and many more. Playing Jazz was the heart and soul of my life and it is still so. came to Portland and played with Leroy Vinnegar and made his last recording in 1999. Still playing Jazz and I still have the same love for it.”

Dan Donahue (Piano) Dan is an accomplished pianist and has performed with big bands in the Portland Area. He knows the standards and backs up vocalists very well and knows how to set and project an atmosphere for classic tunes. His Swing, Jazz, Standards interpretations are some the best in the Portland area of many great musicians.

Matt Schiff guitar Matt Schiff's versatile and straight-ahead jazz style is known for its lyrical and melodic richness, its penchant for swing, and a bluesy undercurrent that harkens back to his Chicago roots. From an early age he listened to and played a wide variety of music from classical to folk, pop, rock, country, blues, and particularly jazz. Influences include Wes Montgomery, Joe Pass, Miles Davis, Cannonball Adderley, John Coltrane, Bill Evans, Oscar Peterson, and McCoy Tyner. Initially, Matt studied at the Jack Ceccini Studios in Chicago, and subsequently with Henry Wolking at the University of Utah in Salt Lake City, where he also began his professional playing career. After participating in workshops with drummer Mel Brown and bassist David Friesen, Matt relocated to Portland Oregon in 1977 where he's since developed a reputation as an in-demand soloist, ensemble leader, sensitive accompanist, and teacher/clinician. Besides numerous appearances at the internationally acclaimed Mt. Hood Festival of Jazz, Matt spent 10 years teaching for Portland’s renowned Jefferson High School music program, and three years teaching and performing extensively in Europe. These travels resulted in the release of his first CD, ‘Matt Schiff and Belgrade Friends’ in '97. His second CD, Matt Schiff ‘Alone’ was released in '07, and his third entitled ‘Sisters’ in '17.

Jason “Goose” Gersing (Saxophone) was born and raised in Miami. He picked up alto sax in 6th grade and by 11th grade was sharing the stage with the great trumpeter Wynton Marsalis, who directed the Broward’s All-County Jazz Band, in which Jason played lead alto sax. While attending college in Pennsylvania, Jason began playing tenor and was active in the Lancaster and Philadelphia jazz scenes and formed a band called Funk ‘n A, which - among other performances - opened for the GZA of the Wu-Tang Clan. The summer before his junior year, Jason joined the Hershey Park band, and it was there that he acquired the nickname “Goose.” After college, Goose moved to New York City and studied jazz and improvisation with Manhattan School of Music professor and pianist Garry Dial. Jason also took lessons with Broadway musician and saxophone guru Eddie Salkin. Goose was active in the NY scene, collaborating with a new generation of jazz musicians, including Danny Fox, Matt Parker, and Mike Campagna. He formed the Goose Gersing trio with bassist Peter Brendler and drummer Ben Cliness and played regularly with the Americana band Yarn and the Andrew Hendryx Ensemble. Also, he spent four months playing in the jazz orchestra of Holland American’s Maasdam cruise ship. In 2008, Goose moved to Paris where he played with the band UFO (Unidentified Funky Object) and in 2011 landed in Portland, Oregon. Since arriving, Goose has played with local bands, including the ska-punk band Smash Bandits, the Mel Brown septet, Baby and Pearl Blowers, as well as internationally renowned artists, such as The Temptations

Number of Performers: 3
Duration: 3 hours
Extra Hourly Rate: $200.00
Outlying areas will be more depending upon length of travel.
Check Availability

Number of Performers: 4
Duration: 3 hours
Extra Hourly Rate: $275.00
Outlying areas will be more depending upon length of travel.
Check Availability

Number of Performers: 5
Duration: 3 hours
Extra Hourly Rate: $350.00
Outlying areas will be more depending upon length of travel.
Check Availability

Number of Performers: 2
Duration: 3 hours
Extra Hourly Rate: $150.00
Outlying areas will be more depending upon length of travel.
Check Availability