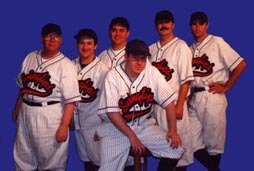 The Swingtips are highly acclaimed as one of the finest modern jump-swing acts today. The Swingtips put on visually and musically entertaining shows reminiscent of Louis Prima, Cab Calloway, and Duke Ellington, yet with a modern twist. The Swingtips incorporate zuit suit costume changes, vintage suits, Babe Ruth era baseball uniforms, and others uniforms, along with fun-filled audience participation. The Swingtips have three CD's with original music receiving national radio air play and are featured on at least nine national swing CD compilations. A regularly featured act at Disney World in Florida, The Swingtips have also been featured on MSNBC, ABC radio, The Hard Rock Casino in Las Vegas, Monsters of Swing 2000, The National Baseball Hall of Fame, professional sports games for the NY Mets, AZ Diamondbacks, the NBA, NFL, and are included in "Who's Who" directories of the 20th century's swing acts. The Swingtips are the perfect act for "all-ages" markets including fairs, festivals, and concert venues, and are a favorite choice for corporate and other functions because of their versatility. In addition to swing music, The Swingtips play many other styles when needed, including: Latin, blues, jazz, R&B, and pop/rock. The Swingtips are an internationally touring act, having toured all parts of the U.S. and Europe, and are based in Phoenix, Arizona.