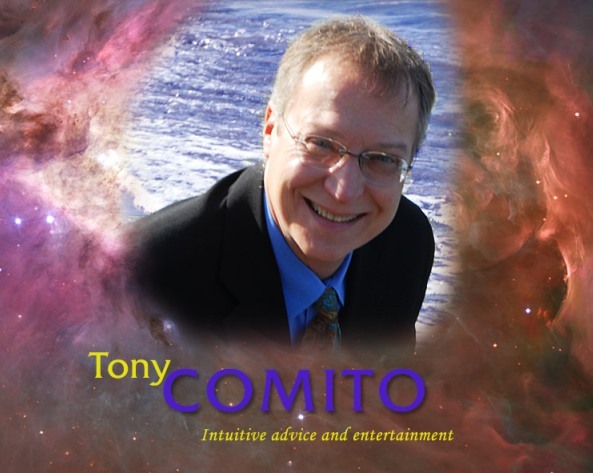 Based in Albuquerque NM
magician, psychic


Who we are is a composite of where we come from, and what we then make of ourselves. Psychic entertainer, Tony Comito, is very Italian. The royal family name comes from the medieval word comitus, which is Latin for 'count'. Comito came to mean a senior officer, in the Roman army, who commanded a galley's crew. A galley is a long, narrow, single decked ship propelled by oars as well as sails. The Comito was the ships real captain.

He said when to row, and when to sail, and directed the crew during battle. On his mother's side, the family name is Murano. The island of Murano is located just north of Venice and is called the "Magic Island." It is famous today, as it has been since Roman times, for its exquisite glass creations, and mirrors. Attractions on the island include the Church of Santa Mariae San Donato, said to house not only the bones of Saint Donates, but also the bones of the dragon he killed with his holy spit.

It was Tony's grandfather, Frank Murano, who noticed his intuitive talent at an early age. Frank, who immigrated to the United States from Italy in 1901, was an expert at scrying, or crystal gazing. He would pray to Saint Donates; meditate over an unusual black mirror; and give his family and friends council. He gave Tony a very old book, by Professor P.R.S. Foli; Fortune Telling by Cards. This was a detail study, using an ordinary deck of cards, to tell the past, present and future.

Tony continued to give readings for his friends, at parties all through high school. As a student, at the University of Iowa, Tony became famous for his psychic parties for sorority houses and special events on campus. It was the 70's, and a wonderful time to be free, and find yourself. Tony Comito traveled to every state in the union, Canada, and Europe. He wore many hats to make his way. He worked as a bartender, magician, bus driver, juggler, house painter, mime, waiter, wire walker, apartment manager, national school show performer, underground newspaper publisher, professional circus clown, and psychic.

Tony Comito settled in Chicago, making his home there for twenty years. When you are ready to listen the correct teacher will appear. Tony was fortunate to study with two world famous Wizards. Tony Andruzzi published New Invocation Magazine, hosted a yearly Bizarre Magic Convention, and published numerous books on magic.

Eugene Burger also influenced Comito. When the leading international trade journal Magic magazine compiled its list of the one hundred most influential magicians of the twentieth century, Eugene Burger was included for his ability to "arouse feelings of astonishment. By definition, magicians are pretty special people, but Eugene Burger is considered exceptional even by other magicians.

Over time, Tony Comito became one of Chicago's busiest psychic entertainers. Every year, from its beginning, Tony was a part of Daley Plaza's October celebration called Pumpkin Plaza. He was featured at many parties at the Field Museum and top hotels including the Drake and Hilton Towers. He helped celebrate W. Clement Stone's birthday at the family mansion on Lake Shore Drive. Stone started selling newspapers on the street and became a billionaire philanthropist. He wrote Success Through Positive Mental Attitude, and said "all I want to do is change the world."

Tony now makes his home in Seattle. Some of his important repeat clients include: the Monaco Hotel's hospitality hour, the mystic tent for the Microsoft yearly picnic, The Children's Museum Benefit at The Bell Harbor Convention Center, and the Victoria Clipper New Years Eve Cruise.