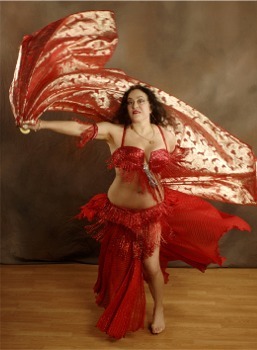 
A noted instructor and entertainer in the Pacific Northwest, Zaphara is one of the few bellydancers in the U.S. of Greek heritage. She has appeared in night clubs and taught workshops throughout the Northwest as well as Florida. During that time, she has appeared on local, national, and Canadian TV.

Zaphara has also traveled to Greece, Egypt, Turkey, Bogata, Columbia & the United Arab Emerites to study, perform and teach Middle Eastern dance. In Cairo, she trained with Nagua Fuad, Egypt's top dancer for the past 25 years, and with Mahmoud Reda, choreographer/director of the Reda Dance Troupe.

Zaphara is choreographer/director of Zaphara's Middle Eastern Dancers, who are members of the Ethnic Heritage Council of the Pacific Northwest.