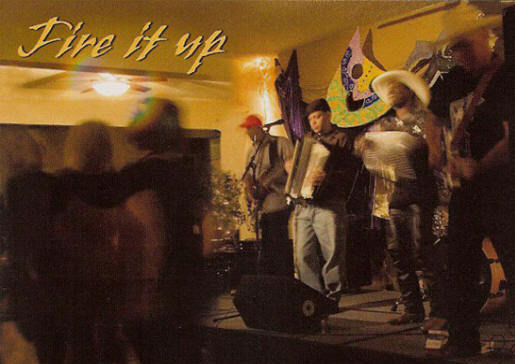 The Zydeco Flames have gained a reputation as the West Coast's premiere Zydeco band. Their fifth CD release, "Bank the Fire," was released in 2003, providing fans with hot Zydeco in the tradition of masters like Clifton Chenier, Buckwheat Zydeco and Queen Ida.

The Flames consistently pack the house in venues ranging from contemporary clubs to major festivals to traditional dancehalls. Their eclectic, soulful style ignites at such clubs as San Francisco's Boom Boom Room, Great American Music Hall, and Berkeley's Ashkenaz. Festival appearances include Bill Graham's New Orleans by the Bay, Seattle's Bumbershoot Festival, the Portland Blues Festival, and the Fremont Street Experience in Las Vegas. They've rocked the Northern Rocky Mountain Folk Festival, the Oakland Art and Soul Festival, the North Beach Festival; and have played to SRO crowds at the Sacramento Jazz Jubilee for ten years in a row.

The Zydeco Flames began as a duo formed by Bruce Gordon and Lloyd Meadows, performing for such events as Les Blank's documentary release party for "J'ai Ete au Bal (I Went to the Dance)" held at Arhoolie Records. The current quintet formed some fourteen years ago and has played together ever since.