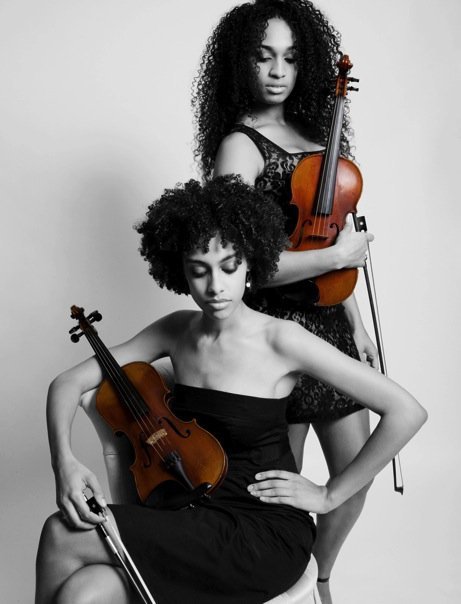 
‘2 Suite Strings' is a classically trained and elegant violin duo offering the highest quality of musical selections. Having spent more than 10 years studying and playing the violin in Berlin, Germany, they have performed with numerous orchestras both internationally and in the US. In 2003 they debuted as soloists at Lincoln Center's Avery Fisher Hall. ‘2 Suite Strings' work together as a harmonious team and perform with a natural sense of musicality, creating an atmosphere of tranquility and sophistication.

Their repertoire spans many genres, including but not limited to: Classical, Contemporary, Jazz, Broadway, Opera, Traditional, Religious, Baroque. etc.

Services available for, but not limited to:

Born in the Big Apple and raised in the divided city of Berlin, Germany, sisters Olivia and Vaughan Bradley-Willemann have been performing and playing the violin together since their early childhood years. Starting at the age of 3 with makeshift violins built for them by their father out of cardboard, their parents, both being professional Opera Singers, gave them a musical head start. Olivia and Vaughan became accustomed to the public eye early on and were encouraged to perform the violin along with their mother in concert, at the Deutsche Oper Berlin. They each continued to study privately with instructors from Berlin Symphony Orchestras throughout grade and high school.

Olivia and Vaughan have each auditioned for and performed with numerous orchestras, including the International Honors Orchestra in London and Brussels, the New York Area-All State Orchestra (Vaughan as the Concertmaster), and the New York All State Orchestra. In 2000, Olivia and Vaughan along with their parents transplanted back to New York and very quickly immersed themselves into the world of classical music in the New York area; they were on many occasions invited to perform as a violin duo at venues such as the German Consulate. Just three years after returning to the States, Olivia and Vaughan made their debut performance as soloists at Lincoln Center's Avery Fisher Hall in New York City, performing the 1st Movement of the Bach Concerto for Two Violins in D minor.

In 2007 Olivia received her Bachelor of Arts from Wellesley College in German Studies while performing as a member of the Wellesley-Brandeis Orchestra. In 2009 Vaughan graduated from Mills College with a Bachelor of Arts in English, while at the same time taking music courses and studying violin privately. While their musical studies remained consistent throughout their transitions into college, their enthusiasm for other kinds of artistic endeavors began to grow. Both Olivia and Vaughan being of a distinguished height gave them the opportunity to branch out into modeling. They have both appeared in notable runway shows in NYC and have dabbled in the commercial print department.

Olivia and Vaughan continue to perform classical music as a duo for various events such as weddings, church services and other public and private functions. They work together as a harmonious team and perform with a natural sense of musicality, creating an atmosphere of tranquility and sophistication.