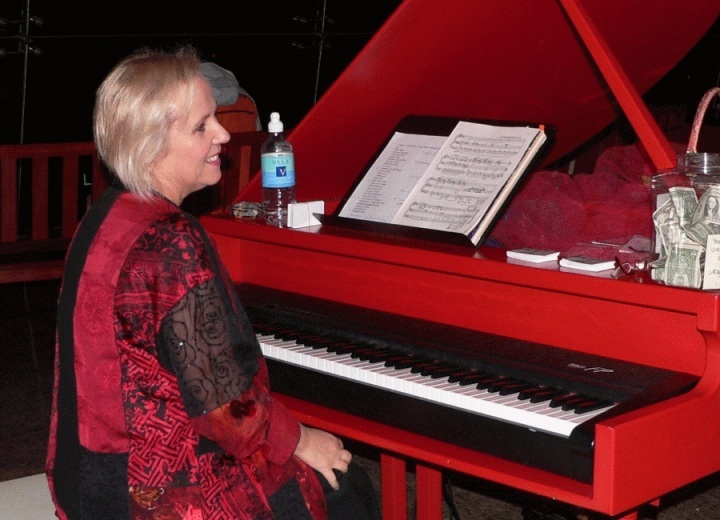 
Australian born pianist/singer/songwriter Bronwyn Edwards Cryer says that luring sailors to their watery graves with her haunting tunes is a thing of the past, as is her nickname "Siren,"

Bron still has a thing for the ocean, though, and has written songs about whales and dolphins. While snorkeling in Maui recently she became enchanted by the multi-layered whalesong of the humpbacks offshore, audible at a depth of about six feet below the surface. Accompanied by a large friendly Honu (green turtle), Bron turned cartwheels in excitement while her husband Randy recorded the Leviathan songs on the underwater camera.

Bron teaches piano, is a composer and arranger, and has been seen schmoozing with Santa while playing her Red Piano at SeaTac International Airport every Christmas season. Her Red Piano Concert Series has enjoyed a Seattle following, supporting local good causes as fundraiser concerts. She is currently serving as Music Director at Fauntleroy Church in West Seattle.

Red Piano concerts are family shows, eclectic, energetic, humorous, with audio-visuals and highly entertaining stage camaraderie. They include a cast of stellar musicians, slide shows and videos, and Bron's students and choir.