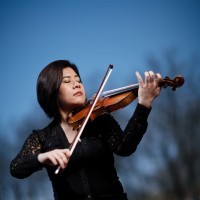 Carol and The City Strings

Based in NY, the Carol and the City Strings was founded in 2009 by Carol Ma. Ms. Since then, the string ensemble has evolved and performs several times a week for events, weddings, corporate receptions, and concerts.

The members have studied chamber music for years at some of the best universities and conservatories with some of the most prestigious teachers in the nation. These musicians continue to be acknowledged for their technique and exciting repertoire.

She also recorded in numerous albums and string sessions, which included “African Skies”, “To Journal Square”, “Come to Me”, “Mosaic”. One of them was the Grammy award album “Mosaic” by the well-known jazz drummer Terri-Lyne Carrington.

Ting-Yu Chou was born in Taiwan. She was graduated from the university of western Ontario and study with Mel Martin. She actively participated in musical event such as Orchestra, Classical and Contemporary Chamber group and music competition. In 2006, She awarded the first place in the violin solo section in the Kiwanis Music Festival. She also invited by the Toronto Taiwanese Chamber Orchestra to performance in their 10th anniversary concert at George Weston Hall. After he graduation from University of Western Ontario, She entered the New York University, where she studied with professor Stephanie Chase.

Jui-Hsien Hung, cellist, was born in Kaohsiung, Taiwan. Miss Hung graduated from New York University (NYU), Master of Music in Performance, as a student of Artist Faculty member Marion Feldman. She was a recipient of the Bertha Scholarship and graduated from the University of Miami (UM) where she studied with Ross Harbaugh.

In New York, Miss Hung performed solo in the Merkin Concert Hall in Kaufman Center and Carnegie Hall. In her hometown, she joined concerts with Taiwan Soloist Symphony Orchestra and Classic Cello Orchestra and Benefit concert. Miss Hung was invited to give a speech on the topic of “Affectionate With Cello” in Taiwan in 2011. She also likes to play different kinds of music, she cooperated with electric guitar and edited music for cello an electric guitar. She participated contemporary music ensemble in NYU and jazz concert in UM.

The Following songlists are growing continually by the week. Here are just a sample of the songs that we play.